The Scottish government has launched a campaign to make the nation a location for data centers powered by renewable energy and connected to international fiber. 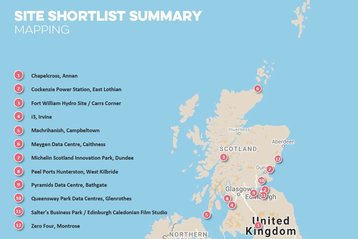 TechRe looked at 100 possible sites and settled on a shortlist, each of which has a unique proposition ready for development by new operators or those expanding in Scotland. Each includes features such as good availability of renewable energy and fiber connections. The consultant also published a longlist of sites that would need remediation works or additional fiber.

The Scottish government's action plan wants data centers powered by renewable energy and connected to international fiber, as a key part of the digital economy, saying "The ability to benefit from and make the most of cloud computing, the Internet of things (IoT) and other data-driven technologies such as artificial intelligence (AI) will, in large part, be influenced by our ability to move data quickly and cost-effectively across and between nations."

The action plan is supposed to bring in new investors, and encourage them to locate in Scotland for its power and fiber, to make sure that Scottish citizens get the benefit of 5G, IoT, and AI, and to keep Scottish businesses competitive.

The plan says Scotland has been improving local fiber where it is allowed to: "Although telecoms remains reserved to the UK Government, the Scottish Government has already intervened to vastly improve broadband and mobile coverage. In recent years, over £1 billion has been invested in such programs. These include Digital Scotland Superfast Broadband (DSSB), Reaching 100% (R100) and Scottish 4G Infill (S4GI)."

Alongside terrestrial fiber, the government wants a subsea cable landing plan for the West, North, and East of Scotland, and promises that Crown Estate Scotland will help develop a package of measures and incentives to attract new cable developers.

The plan says: "Through coordinated action, we can position Scotland as a leading zero-carbon, cost-competitive green data hosting location, which can contribute towards our ambition of achieving net-zero emissions by 2045."

The plan promises that the Scottish Ministers for Energy, Trade, and Rural Affairs will all be on a Ministerial Working Group to coordinate activity, and promises that it will be able to intervene "where public action or funding may be required to attract further commercial and international capital investment" for green data centers.

The idea is to grow existing data centers such as DataVita, Brightsolid, and those in development at the likes of Queensway and Pyramids Park - and the plan also suggests that Scotland's public sector data should migrate local Scottish resources, and promises to identify any needs for data center skills.

Following on from the twelve sites identified, the Scottish government wants a complete edge data center site analysis to find locations where localized data center resources can be sited.

Scotland has yet to make it to the first division of data center locations in lists from the likes of CBRE and JLL, with most sources placing Frankfurt, London Amsterdam, and Paris (the FLAP) markets at the top, and Dublin as the next contender. However, a report from JLL this week says that demand in Europe as a whole is surging, with 438MW added this year in the FLAP-D markets, and take-up growing 22 percent in the year 2020, to 201.2MW.

“We have long known that Scotland has a tremendous offering to the data center sector and these two documents provide evidential support for this with a particularly strong renewable energy story," said James King, heads of Host in Scotland.