The Metric Capital-backed company previously provided satellite and other telecommunications services from two teleports in Backnang, Germany and Leuk, Switzerland. 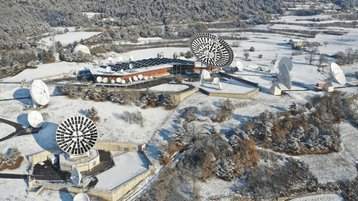 John Harris, CEO of LEUK Teleport & Data Centre, said: “As we say goodbye to the Signalhorn brand we would like to thank all our customers and partners for trusting our company with their critical communications and we are committed to continuing to provide outstanding satellite and data connectivity solutions as LEUK evolves and grows into Europe’s first 100 percent green and secure teleport and data center. We look forward to innovating with you for 50 more years and beyond.”

Under the rebrand announced this week, the company said it plans to have a “renewed focus” on its flagship teleport in Leuk in the Valais canton, serving customers in GEO with the capability to serve in LEO & MEO requirements.

In a blog on the company’s website, the company said the Leuk site will be undergoing an “ambitious” solar project, utilizing unoccupied space to generate large volumes of green energy.

As well as deploying panels on the roof of its main building, the company has installed solar panels on its now-offline Leuk 2 antenna; Constructed in the 1970s, the now-legacy C-Band antenna measures 32m (104 ft) in diameter, equating to 3,216 sqm (34,600 sq ft) in surface area and is reportedly the first in the world to be converted this way. 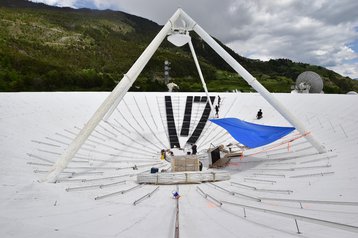 The company says the site is powered by hydroelectric energy as well as on-site solar.

Constructed in 1972, the Leuk site has more than 50 antennas serving customers on C-Band, Ku & Ka-Band frequencies. Previous Signalhorn information said the data center provided white space up to 3,000 sqm (32,300 sq ft) totaling around 1,645 racks, however, a post on SpaceWatch suggests this has been expanded to 5,000 sqm (53,800 sq ft).

The site was previously certified as Tier 3 by the World Teleport Association, and recently joined the Swiss Data Center Association.

The Backnang site, near Stuttgart, launched in 2001 and has 80 antennas supporting C and Ku-Band. The new company website makes no mention of Backnang and it is unclear if the company has sold the site or has been formed into a separate company.

The Leuk site is home to a new ground station for the European Organisation for the Exploitation of Meteorological Satellites’ (EUMETSAT) new Meteosat Third Generation (MTG) weather satellite system. The first MTG satellite will be launched into orbit in late 2022. The new system will see the launch of a total of six new geostationary satellites that will provide coverage of weather and climate activity across Europe and Africa.