No one hurt and no outages reported, after weekend blaze at hosting company's MD2

Firefighters in Madrid put out a blaze at an Equinix data center, in the early hours of Sunday morning. No injuries occurred, and no service impacts appear to have been reported.

The fire happened at Equinix's MD2 data center, a building shown in a video tweeted by the fire service. A local source reported the fire was in the Equinix facility, and this was confirmed to DCD. 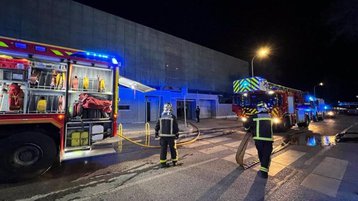 DCD has seen no signs of any outages affecting customer services.

According to an Equinix statement, "at 4.15am on Sunday January 30th  Equinix security systems detected smoke emanating from a power room in the Equinix MD2 IBX.  The Agencia de Seguridad y Emergencias Madrid 112 attended, and a small fire was contained to a power room and swiftly extinguished with no injuries suffered."

The company says the fire made "a brief interruption in power supply only", and added that a full investigation is being made into the cause of the fire.

Seven fire crews attended the blaze in Calle de Valgrande de Alcobendas, according to an announcement from the Madrid emergency services, 112 Communidad de Madrid, reported in local media. The fire was in a basement area, where transformers are located, and "completely filled the garage with smoke".

The firefighters extinguished the fire without affecting the main floors of the building, and then ventilated the building. Police and an ambulance also attended, but no injuries were reported.

The fire service said the fire occurred in a 5,000 sq m (53,800 sq ft) building belonging to a "dedicated to hosting web servers" on Calle de Valgrande.

Data center fires can be a serious business, and operators are generally encouraged to implement fire prevention systems that will prevent them spreading.

Neither OVHcloud nor Cyber 1 have issued reports detailing the cause of these events.