The next step towards a true Interplanetary Internet

The Korea Pathfinder Lunar Orbiter is planned to launch in August 2022, carrying a host of experimental and scientific equipment, some of which is part of the wider NASA-led Artemis project, aimed at returning humans to the Moon. 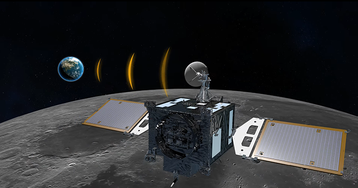 Delay or disruption-tolerant networking (DTN) is a store and forward protocol where information is passed from node to node and then stored when connectivity falls apart, making it perfectly suited for the latency-heavy and disruptive environment of outer space.

The orbiter will in particular test a version of DTN known as Bundle Protocol (published as “RFC5050”), pioneered by NASA and backed by TCP/IP co-founder Vint Cerf.

“In order to effectively support manned and robotic space exploration, you need communications, both for command of the spacecraft and to get the data back,” Cerf told DCD for our feature on DTN earlier this year.

“And if you can't get the data back, why the hell are we going out there? So my view has always been ‘let's build up a richer capability for communication than point-to-point radio links, and/or bent pipe relays.’"

Cerf has long pushed for an Interplanetary Internet, with early space DTN work dating all the way back to 1998. Progress has been slow - an earlier version of DTN, CFDP, was successfully trialed by Martian rovers Spirit and Opportunity, while the International Space Station tested out the Bundle Protocol in 2016.

“We had onboard experiments going on, and we were able to use the interplanetary protocol to move data back and forth - commands up to the experiments, and data back down again,” Cerf said.

But it is in the US' flagship Moon effort that Cerf and others hope that the ball will finally get rolling. “Artemis may be the critical turning point for the interplanetary system, because I believe that will end up being a requirement in order to successfully prosecute that mission," he said.

The Artemis program initially hoped to take the first woman and the next man to the Moon in 2024, and build sustainable operations on the planetary satellite by the end of the decade, ahead of a manned Moon Base.

This month, however, NASA's Office of Inspector General said that delays to its $1bn space suit program has made a lunar landing by late 2024 "not feasible.” Funding shortfalls, Covid-19 closures, and other technical challenges have also delayed the project.

If and when Artemis leads to an increased human presence on the Moon, those astronauts - and the plethora of sensors and robotic devices that will be needed to support them - are expected to be significantly more connected than lunar explorers of old.

Parts of the Moon that are visible to Earth could communicate with direct line of sight lasers, but areas within craters, or on the other side of the Moon, would need a relay system. It is here that DTN is expected to prove useful.

The wider Moon Internet program is currently being operated under NASA's LunaNet, which DCD profiled here. That could include a data center on the Moon, while an early test under Project Tipping Point will see Nokia deploy Lunar 4G.

The European Space Agency also plans to build a telecoms and positioning network around the Moon, under its Project Moonlight initiative, which DCD profiled here.

The Korea Pathfinder Lunar Orbiter will be a part of that wider effort, helping test the connectivity solutions that could form the backbone of an Interplanetary Internet. DTN work for the orbiter will be led by Korea's Electronics and Telecommunications Research Institute.

It will also carry NASA's 'ShadowCam,' a specialty camera designed to observe perpetually dark areas of the Moon. The satellite, Korea's first to leave Earth's orbit, will additionally measure the Moon's magnetosphere, take more surface photos, among other tests.

SpaceX is expected to launch the orbiter in August 2022, followed by a three-month journey to our closest neighbor.