Diercks Hall gets a new Nvidia system - as a gift

A multi-million gift from a former student has allowed Milwaukee School of Engineering (MSOE) to open a Computational Science Hall that houses a 'state-of-art' data center and a Nvidia GPU powered supercomputer.

The grand opening of the Computational Science Hall was made possible thanks to a $34 million gift from MSOE alumnus Dwight Diercks and his wife Dian, the school's largest donation from a former pupil. Diercks is now senior vice president of software engineering at Nvidia and was its 22nd employee after he joined the firm in 1994. He now oversees a team of 5,000 software engineers. 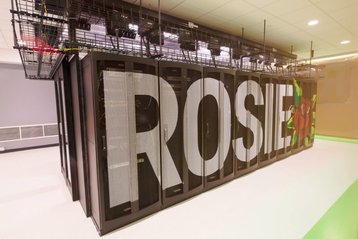 The data center is located on the second floor of the 65,536-square foot, four story building, named Diercks Hall.

Other features of Diercks Hall are “modern classrooms, innovative laboratories, an auditorium and spaces to support companies that partner with MSOE.”

The supercomputer, named Rosie, will help students working on MSOE's new B.S. in Computer Science degree, which is focused on artificial intelligence.

Undergraduate students will have access to the supercomputer, giving them an 8.2 petaflop (single precision) machine to help “solve real-world problems in their course work.”

“We knew MSOE needed a supercomputer and one that can expand to scale out for students and scale up for local industries and professors,” Diercks said. He apparently made the donation, and initiated the AI initiative, because of the school’s practical, hands-on approach to teaching future engineers, which sees them spend more time in labs than classrooms.

Nvidia said that Rosie is powered by more than 100 GPUs. The system includes three Nvidia DGX-1 pods, each with eight Nvidia V100 Tensor Core GPUs, and 20 servers each with four Nvidia T4 GPUs.

The nodes are joined together by Mellanox networking fabric and share 200TB of network-attached storage. The GPU chip giant announced earlier this year that it was acquiring Mellanox for $6.9 billion.

“MSOE now has the single most important instrument of knowledge today,” Nvidia founder and CEO Jensen Huang said, delivering the first address in the Nvidia auditorium. “Without access to the correct instrument, you can’t access knowledge.”

The naming of the supercomputer was inspired by the women who programmed one of the earliest computers - the Electronic Numerical Integrator and Computer (ENIAC), which was completed in 1946 and was used by the US Army's Ballistic Research Laboratory. Their work was detailed in the documentary “Top Secret Rosies - The Female Computers of WWII.”