Swissbit has launched its first data center solid-state drive (SSD), a U.3 model with 8TB capacity.

The N4200 device has a faster write speed than standard SSDs, and twice the endurance of its rivals, according to Swissbit, the European NAND storage maker based in Switzerland, which announced its intention to step into data center products a month ago. 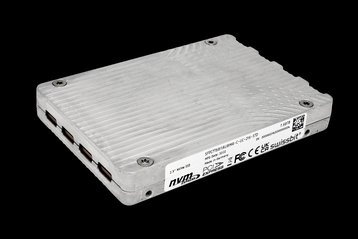 The device has specially adapted firmware optimized for data center workloads, and can be offered in predefined workload cluster configurations, including options for Big Data, video streaming, or machine learning.

The Swissbit SSD, made with the help of Burlywood, can also measure its workload on the fly, which means the firmware to adapt to live conditions. Swissbit is offering an optional in-depth workload analysis and tailored firmware configuration.

"Most off-the-shelf SSDs lose performance and endurance as well as response time due to non-optimized flash management," said Roger Griesemer, general manager of the memory division at Swissbit. "With the N4200, we are taking a different approach, optimizing to specific application profiles rather than outdated standard benchmarks. For the implementation, we have established the Swissbit optimization process, which starts with an evaluation of the actual workload. On this basis, we individually optimize the firmware so that the relationship between performance and endurance is adapted to the real workload of the customer’s application."

Customers can specify the workload the devices will perform at their data centers. or pick one of the common workloads such as Big Data, video streaming, machine learning, AI, or IoT.

To use the full optimization, the customer takes a test copy of the N4200, and runs it on live workloads, so Swissbit can analyze a detailed workload profile and provide a well-tailored SSD for the eventual use.

The 2.5-inch U.3 SSD is based on enterprise-grade 3D TLC NAND (eTLC). It supports the U.3 standard, and is backward compatible with U.2, featuring a 4-lane PCIe interface to PCIe 4.0 specification for up to 8,000 MBps bandwidth in both directions. The storage capacity is 8TB (7.68TB) available immediately, with a 16TB (15.4TB) version to follow shortly.