The European Commission has contracted Thales Alenia Space to lead the ASCEND feasibility study for data centers in orbit.

'Advanced Space Cloud for European Net zero emission and Data sovereignty' is part of the EU's Horizon Europe research program, and aims to see if data centers in space would lead to fewer emissions than those on Earth. 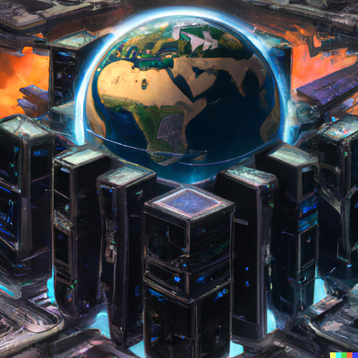 The data centers would rely on solar power plants generating several hundred megawatts, which would also be in space.

They would then link to the Earth via high-throughput optical communications.

The first stage of the study sets out to answer a critical question - whether the emissions created by producing and launching the space data centers would be less than that generated by ground based ones.

Then it will study whether it is possible to develop the necessary launch solution and to ensure the deployment and operability of these spaceborne data centers using robotic assistance technologies, with a particular focus on those developed in Europe, such as the EROSS IOD demonstrator (also made by Thales Alenia Space).

Thales Alenia Space notes that if the project is successful, it could justify the development of a more climate-friendly, reusable heavy launch vehicle.

The company, jointly held by Thales (67 percent) and Leonardo (33 percent), was last year contracted by NASA to study a data center on the Moon.

That facility, which we profiled in 2021, would be built for lunar operations, reducing latency for astronauts and machines - rather than being used by terrestrial humans.

NTT and SKY Perfect JSAT also plan to build a number of compute- and storage-focused satellites that would together form a single data center via optical communications.