From 89 data centers down to 13, with a 25 percent increase in capacity

T-Systems, the loss-making services division of Deutsche Telekom, is shedding staff and assets, but has undergone a very successful data center consolidation, according to a company announcement.

Deutsche Telekom blamed T-Systems for disappointing earnings in Q3 2018/2019, and the division is being downsized, while its mainframe business has been sold to IBM. While all that is going on, T-Systems claims to have completed "the world's largest transformation project," slashing its data centers to a seventh of their original number, while holding onto customers and increasing capacity. 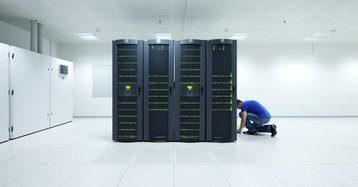 T-Systems is going through a major restructure, under US turnaround specialist Adel Al-Saleh, who was brought in a year ago when Deutsche Telekom took a big write-down because of the division's losses. IT-Systems is expected to lose around 10,000 of its 37,000 staff, and exit from 90 of the hundred cities where it currently has offices.

The company has sold its mainframe business to IBM for a reported €860 million ($986.16m), with 400 staff going to Big Blue, while it will continue to sell mainframe services.

Against that background, the IT consolidation which began several years ago, is going well, according to a press release issued in German by T-Systems, which says the project has reduced T-Systems' data centers around the world from 89 to 13, shifting its customers along with the resources, and increasing storage and server capacity by 25 percent. At the same time, emissions from data center operations have fallen by 56 percent.

The consolidation process will save "hundreds of millions" of euros, and involved moving 23,600 computers without disrupting the customers' operations, the release says. Some 60 percent of the migrations happened within Germany. T-Systems' policy of relying on "twin" data centers, which mirror their data for added resilience, will have helped in the process.

Much of the capacity will have been relocated to T-Systems' recently opened Biere II data processing center in Saxony-Anhalt. Capacity at the so-called "House of Clouds" is modular and can be increased as necessary.

The consolidation has had to work with some demands to keep resources locally, for instance, maintaining capacity in Switzerland, said Roger Waller, responsible for infrastructure services at T-Systems in the country: "We have a few customers who prefer local data storage in Switzerland due to legal requirements. The operation of T-Systems' Swiss data centers is therefore of strategic relevance for us."

Jörn Kellermann, head of IT production at T-Systems is proud that the company has "been able to transform our business operations without sacrificing quality in customer operations."