And he still thinks the US should get a cut

President Trump appeared to favor Oracle in his latest remarks on TikTok's forced sale of its US operations.

"I think Oracle is a great company," he told reporters in Yuma, Arizona. "I think that Oracle would be certainly somebody that could handle it. Yeah. We gave them until September 15.”

It's never too early to introduce your kids to ERP software 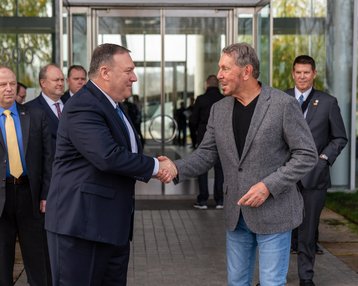 Just yesterday it was revealed that the enterprise tech company is working with venture funds to bid for TikTok's North America, Australia and New Zealand businesses, in competition with Microsoft.

This month, President Trump signed two executive orders targeting TikTok parent ByteDance, the first banning US companies from doing business with the platform from September 20, and the second demanding the company sell or spin off its US TikTok business within 90 days.

“There is credible evidence that leads me to believe that ByteDance... might take action that threatens to impair the national security of the United States,” Trump claimed at the time. The Chinese company denies the allegation, and says that the forced sale is politically motivated.

During his Arizona press briefing, the President doubled down on calling for the US Treasury to receive a cut of the sale, something that would be without precedent, and appear to suggest that the ban is not purely about national security. “I guess Microsoft wants it and so does Oracle, and probably so do other people,” Trump said. “But they have to also make sure the United States is well compensated because we’re the ones making it possible. Very simple: We’re the ones making it possible. So our Treasury has to be very well compensated.”

While this would be highly unusual, it is believed to be within the Committee on Foreign Investment in the US's powers to demand a cut.

Worth more than $70bn, Oracle cofounder and chairman Larry Ellison has decried the apparent leftward bent of many Silicon Valley businesses and employees. “I think it’s very important that our democratic capitalist system win the battle, win this competition with China," he told Fox Business in 2018. "We don’t want to find ourselves in second place." Now, in his bid for TikTok, he hopes to be the beneficiary of state intervention in the free market.

Ellison is also one of the tech industry's few Trump supporters - backing the president even as polls turn against him. The 76-year old hosted a fundraiser for Trump in February, prompting employee protests, while company CEO Safra Catz supports Trump’s re-election effort and is known to have privately dined with the world leader.

The company even provided the White House with software to help study and promote unproven coronavirus treatments, including hydroxychloroquine.

While a close connection to the executive office has its benefits, it does not guarantee success. Oracle equally heavily lobbied the White House to break up the Joint Enterprise Defense Infrastructure cloud contract so that it could compete for parts of the $10bn military cloud contract. Amazon Web Services claims such interventions may have stymied its chances at winning JEDI, but it failed in its core aim.

Instead, the contract was awarded to Microsoft.