As the US coronavirus death toll passes 100,000

The President of the United States has signed an executive order targeting social media platforms, after Twitter labelled two of his tweets as factually incorrect.

The 'Executive Order on Preventing Online Censorship' attacks Twitter, Facebook, Instagram, and YouTube, as well as Democratic Representative Adam Schiff, and a specific Twitter employee. It directs federal regulators to crack down on social media platforms and to consider taking away the legal protections that shield them from liability for what gets posted on their platforms.

The order followed Twitter adding a message fact-checking some of his tweets as factually incorrect. Since the order, the President got another warning from Twitter, after tweeting what appears to be a call for the military to shoot protesters in Minneapolis. Twitter put that message behind a warning which said "This Tweet violated the Twitter Rules about glorifying violence. However, Twitter has determined that it may be in the public’s interest for the Tweet to remain accessible." The tweet, which is still accessible, is viewable with a click - but there are restrictions on retweeting and sharing it. 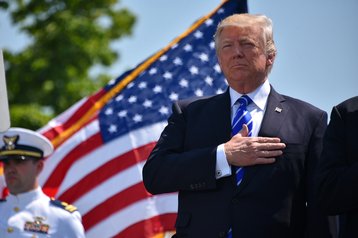 "We’re here today to defend free speech from one of the greatest dangers it has faced in American history," Trump said as he signed the order. "They’ve had unchecked power to censure, restrict, edit, shape, hide, alter virtually any form of communication between private citizens or large public audiences."

The order seeks to roll back protections under Section 230 of the Communications Decency Act, which limits the liability that companies face for content posted by their users.

The order also requires the federal government to review its spending on social media advertisements, asks the Federal Trade Commission to investigate whether social media companies have misled users, and asks the attorney general to draft a proposal for legislation to give more power to the FCC to control social media sites.

"This EO is a reactionary and politicized approach to a landmark law," Twitter spokesperson Brandon Borrman said. "#Section230 protects American innovation and freedom of expression, and it’s underpinned by democratic values. Attempts to unilaterally erode it threaten the future of online speech and Internet freedoms."

Facebook spokesperson Liz Bourgeois said that “by exposing companies to potential liability for everything that billions of people around the world say, this would penalize companies that choose to allow controversial speech and encourage platforms to censor anything that might offend anyone.”

Google's Riva Sciuto added: “We have clear content policies and we enforce them without regard to political viewpoint. Our platforms have empowered a wide range of people and organizations from across the political spectrum, giving them a voice and new ways to reach their audiences. Undermining Section 230 in this way would hurt America’s economy and its global leadership on Internet freedom.”

Executive orders are presidential directives affecting government, and can be subject to legal challenge. This one has a mostly symbolic value, and it is not clear whether it would stand up in court - but it could be followed by more detailed legislation, and in itself marks a huge moment in the Internet's short history.

“Regardless of the circumstances that led up to this, this is not how public policy is made in the United States. An executive order cannot be properly used to change federal law,” the traditionally-Republican pro-business lobbying outfit the US Chamber of Commerce said.

Gary Shapiro, the president and chief executive of the tech lobby Consumer Technology Association added: “We oppose today’s unconstitutional, ill-considered executive order... America’s Internet companies lead the world and it is incredible that our own political leaders would seek to censor them for political purposes.

"These same politicians extensively advertise on them and just a few minutes online will reveal these platforms contain a multitude of political views."

Should Section 230 protections be removed, social media networks would likely have to censor their platforms more aggressively, lest they face legal risk.

Putting it in context

Many across the political spectrum have noted with unease the growing power of technology giants over how people consume and share information.

Privacy activists have long called for regulation on what data is collected; how targeted ads can be used to split racial groups, genders, and regions; as well as the flow of dark money into political ads - along with numerous other concerns. This is not that.

Trump's actions come only after his tweets were amended with context about mail-in ballots, after his post was deemed factually incorrect.

Instead, the Daily Beast reports, the meeting primarily consisted of the president complaining that his follower count had dropped, with the nation's leader suggesting Twitter had purged fans. Dorsey told the president that the company had removed bots.