UK heatwave sends operators onto the roof with hoses

As the UK swelters in a heatwave, with 40C temperatures recorded for the first time, some data centers are using hosepipes to boost their cooling.

Staff are being sent out with hosepipes to spray air-conditioning units with water, in London and inside the M25 region, where particularly high temperatures have been recorded, according to a report in Bloomberg. 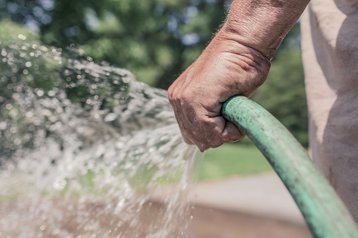 “Many data centers in London will have people on the roof with hoses at the moment,” Adrian Trevelyan, After Market Director at Airedale International told Bloomberg, adding that it is happening “within the M25 and into the City.”

Particularly at risk are small data centers in dense urban areas that are running at full capacity. They could need emergency cooling, and a simple water spray will lower the ambient temperature around the air conditioners, said Trevelyan.

This water use will be on top of the already high water use of data centers are most likely to need emergency hosing during a hot spell.

Despite some public announcements most data centers are keen to keep their regular data center water use secret, and this extra use will add substantially to that.

The hose approach is a “Heath Robinson solution,” said Sophia Flucker, director at data center consulting firm Operational Intelligence. “It might get you out of a fix on a very hot day, but you are possibly shortening the equipment’s life."