Embattled UK Prime Minister Boris Johnson visited the launch of the UK's most powerful supercomputer, the Archer2 system in Edinburgh, as part of a wider tour of Scotland.

The visit comes as the PM is being investigated for breaking his own Covid laws with multiple Downing Street parties held during lockdowns. 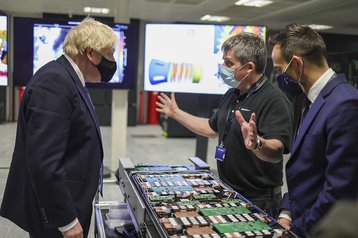 With a peak performance of around 28 petaflops, the GPU-less system is the most powerful in the UK. It consists of 5,860 nodes, each with dual Epyc 7742 64-core processors at 2.25GHz, giving 750,080 cores in total. It is connected by the HPE Cray Slingshot interconnect, 2× 100 Gbps bi-directional per node.

The new system beats out Nvidia's eight petaflops Cambridge-1 supercomputer, which launched last year in a failed bid to win over UK regulators to its attempted Arm acquisition. Johnson was also in talks to visit the launch of that facility alongside then-Health Secretary Matt Hancock. Ahead of the launch, it was revealed that Hancock had breached social distancing rules with an adviser he was having an extramarital affair with, ultimately leading to his resignation.

"It was great to witness the front-line work of UK supercomputing science right here in Edinburgh - including seeing the real horsepower behind mapping climate change, driving discovery in engineering and researching the effects of antibodies, in person," Johnson said in a prepared statement.

"Scotland is rightly benefiting from our £79 million investment, placing it front and center of research and development, while boosting, spreading and leveling up opportunities across the UK."

"It is exciting to see Archer2 coming online and the work that it is already supporting to help tackle some of the world’s most pressing challenges," university principal and vice-chancellor Professor Peter Mathieson said.

"Its location within the EPCC is testament to the University’s historic and sustained excellence in computer science and the work of Professor Mark Parsons and the whole team there. We have ambitious plans for supercomputing in Edinburgh - Archer2 is a significant step towards achieving them."

At the facility, the PM also visited the halls that will eventually be home to successor exascale systems. His visit was part of a “leveling up” tour of the UK, part of a campaign to show that the Conservative government was investing in the nation beyond London after more than a decade in power.

Johnson was criticized last year for admitting in a speech that he had only "the skeleton" of a plan to level up the country, after reports of "entrenched inequalities" that left some areas poorer than in former East Germany.

This year, the government promised to increase domestic public investment in R&D by at least 40 percent outside of the Greater South East.

However, independent Parliamentary spending watchdog the National Audit Office found that billions were being wasted on projects that were either too small to revive poorer areas, favored Conservative areas, or on politician's pet projects.

The Scottish regional head of Johnson's Conservative party, Douglas Ross, has called on Johnson to resign due to the recent 'partygate' scandals. Johnson did not visit Ross during his Scottish trip.