Vantage launches first facility in South Africa, breaks ground on another in Frankfurt

Vantage has launched its first South African data center and broken ground on a new facility in Germany.

The company this week announced the delivery of the first facility on its Johannesburg campus, as well as the start of construction on a second data center on its Frankfurt II campus. 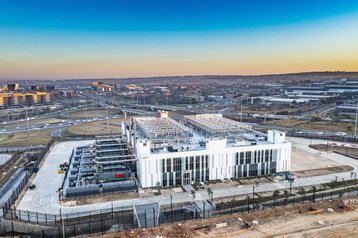 Vantage has opened its first data center (JNB11) in Africa after breaking ground in October 2021. The two-story facility offers 16MW of critical IT capacity across 130,000 square feet (12,000 square meters). The project was delivered in 10 months, 10 days ahead of schedule.

“Our rapid turnaround on the construction of our first Johannesburg facility has allowed us to more quickly meet demand for hyperscale data centers in the area,” said Justin Jenkins, chief operating officer, EMEA at Vantage Data Centers. “At Vantage, we pride ourselves on not only our speed to market, but also our commitment to become part of the local community and cement our reputation as a reliable data center partner in the region.”

Located in Waterfall City, Vantage’s 30-acre (12 hectares) campus will offer 80MW of capacity and more than 650,000 square feet (60,000 square meters) across three data centers once fully developed. In June, Vantage announced it had entered a 20-year power purchase agreement (PPA) with SolarAfrica to power the campus.

In Germany, Vantage has broken ground on a second facility (FRA22) at its second campus in Frankfurt.

The 16MW, 130,000 square feet (12,000 square meters) facility sits on seven acres in Raunheim. Once fully developed, the campus will include 56MW of IT capacity across two data centers.

“Vantage continues to develop state-of-the-art data center campuses in the most vital locations across EMEA to support some of the world’s leading technology companies,” said Antoine Boniface, president, EMEA at Vantage Data Centers. “The speed and scale of our deliveries is unprecedented in our company’s history, as is our commitment to sustainable development. It’s truly a remarkable time in the data center industry to be on the frontlines of the digital infrastructure revolution.”

Vantage broke ground on the first facility in Raunheim in late 2021; the first phase is due live later this year.

The company is also continuing to develop its first 55MW Frankfurt campus, located in Offenbach. It recently began work on the second of three buildings on the site. Once fully developed, both campuses will offer customers a total of 111MW of capacity in the Frankfurt region.