Vertiv puts Li-ion in a standard cabinet, with proprietary management

Vertiv has been a proponent of Li-ion for some time, arguing in favor of their low weight, and high performance. However, the HPL battery cabinet, launched at the Battconn event in Orlando, Florida last week, is the first Vertiv Li-ion product with the company's own battery management system. Jeff Kessen, vice president of global energy storage at Vertiv, told DCD this is because Li-ion systems are still relatively new, and already have their own management systems. 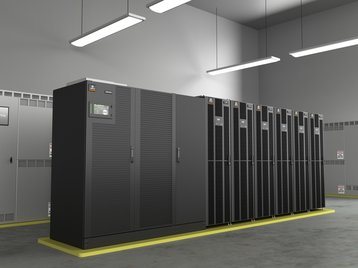 "There's a battery management system (BMS) in every Li-ion solution. You can't get UL certified without it," explained Kessen. Early Li-ion batteries in laptops and phones would occasionally catch fire, so the electrical safety organization Underwriters Laboratories (UL) mandated a BMS, which has normally been provided by the battery maker.

"In nearly all Li-ion solutions that are already in the market, the BMS is developed by the battery module manufacturer. These systems often don't have the features that optimize interoperability with a UPS," said Kessen. By contrast, he said, Vertiv's own BMS has features that improve integration with the UPS controller. Each battery module includes sensors and integrates with the battery monitoring system for real-time information down to the cell level.

The cabinet is the size of a standard data center rack and contains six lithium-ion battery modules. Up to eight of these cabinets can be connected to a single UPS. The product uses nickel-manganese-cobalt (NMC) batteries, a Li-ion chemistry which is already widely used for electric vehicles.

Lithium-ion batteries are smaller, lighter and longer-lasting than conventional valve-regulated lead acid (VRLA) batteries, and now make up around 30 percent of Vertiv's deployments, according to Kessen. The batteries in the HPL have a 10-year battery life guarantee, and the unit is warranted to work at up to 86°F (30°C), so data center operators can reduce the cost of cooling their equipment.

The HPL cabinet works with large Vertiv three-phase UPS systems including the Liebert EXL, EXL S1, NX and NXL. It is available in North America and Asia.