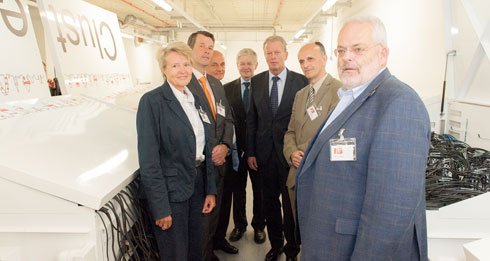 Austria’s academic and scientific communities have devised a way of cooling supercomputers with oil usually used for making cosmetics - paraffin.

Version 3 of their eponymously named super computer (VSC-3) now has 2,020 nodes, each with 16 processor cores, which produces an aggregate processing power of over 600 teraflops.

This means that VSC-3 could measure every dimension (including time) of each or shot in the entire World Cup and calculate the launch angles, in a nanosecond.

The intense processing power of the high performance computer (HPC) creates huge amounts of heat at its hosting site, in the Science Centre at Vienna University of Technology (TU Wien), since eight different Austrian universities use it to calculate everything from meteorology data to particle physics research.

The VSC-3 uses a third of the energy of its predecessor (VSC-2) despite having a much larger workload, since additional universities and academic bodies joined the consortium.

According to Professor Herbert Störi of TU Wien, scientific project manager for VSC-3, one of the biggest savings came in cooling.

“It was crucial for us that energy efficiency be taken into account in the planning stage,” Störi said.

The design of the VSC-2 computer was considered an ecological trailblazer in its time, according to Störi, but the oil cooling invention has raised the bar further.

The mainframes processors are immersed in tanks containing 35 tons of paraffin oil, which has a far greater capacity for energy transfer than the traditional air and water options, says vice rector Georg Haberhauer of the Vienna University of Natural Resources and Applied Life Sciences (BOKU).

“We are setting new standards in sustainability: the novel, energy-efficient liquid cooling fits in perfectly with our university's philosophy of conserving resources while remaining open to innovation,” said Haberhauer.