Company will have 26 Edge locations live, plus one core in Durban by end of August 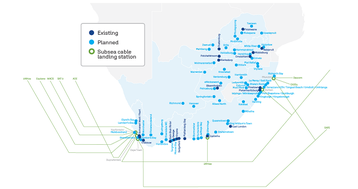 Pietermaritzburg, New Germany, and Mount Edgecombe are reportedly already live. Once all complete, the company will have 26 Edge sites live, plus a core data center in Durban.

In a May release, the company said it 17 0.5MW Edge data centers already live across the county, and would have ‘more than 100’ in operation by the end of 2022.

“We are continuing to expand OADC EDGE with new DC facilities so that 5G operators, ISPs and fiber operators can cost-efficiently extend their network reach into even more locations,” said OADC Chief Technical Officer Bob Wright.

In November 2021, WIOCC (which stands for the West Indian Ocean Cable Company). announced it had raised $200 million to launch a new pan-African data center network known as Open Access Data Centres. OADC later said it planned to invest $500 million over the next five years.

The company launched its first 5MW, 2,200 sqm (23,700 sqm) data center in Durban, South Africa, earlier this year. The company’s second core data center is to open in Lagos, Nigeria later this year and will be the landing point for Google’s Equiano cable, and a third facility in Mogadishu, Somalia, is due to come online ‘before the end of 2022'.

This week the company said 2-3MW, Tier III-quality facilities are coming online in Johannesburg and Cape Town during Q3 2022.