Can we measure the ICT handprint?

We know how much carbon we consume - how much do we help others save?

The tech industry is responsible for emitting carbon. Every industry does, and data centers are particularly energy intensive. They cause something like two percent of the world's emissions - according to admittedly very imprecise estimates.

But tech has a very obvious positive side. We use it for a reason. It improves lives. Shut down the medical data centers and people would die.

Within the positive side of tech, we can easily imagine cases where technology specifically counters the sector's carbon emissions. If you make a Zoom call instead of taking a plane to a meeting, you obviously lower your carbon footprint. Storing music as bytes saves on the physical production costs and emissions of CDs.

Smart transport, smart grids, and smart cities (in fact anything with the word "smart" in front of it) are predicated on making efficiency savings. These systems use data, and often tech-based predictions to ensure that resources are targeted where they are needed. Empty bus journeys are minimized, energy consuming services are switched on when the grid is greenest, and so on.

Tech proponents refer to this as the ICT "handprint" - an effect which counters the negative footprint of technology.

"ICT is virtually unique in having a significant handprint," says Stephen Harper, Intel's head of energy policy and environment, in an article for the Environmental Forum, also published by the Digital Climate Alliance. "The handprint metaphor captures the fact that while ICT devices and networks embody carbon in their manufacturing, supply chain, and use, overall their applications in networks employed throughout society reduce greenhouse gas emissions more than they create them."

ICT is virtually unique in having a significant handprint. While ICT devices and networks embody carbon in their manufacturing, supply chain, and use, overall their applications reduce greenhouse gas emissions more than they create them Stephen Harper. Intel

That's a big claim. Intuitively we feel it is probably true, but can we know if ICT's handprint is bigger than its footprint? To find that out, we'd have to calculate the actual emissions saved, and that gets complicated.

Take Zoom calls. Assuming the service isn't suffering a major outage, your call will use a small amount of energy, consumed in your device, the network, and data centers (probably belonging to AWS). Depending on the energy tariffs you pay, and those paid by network operators and Amazon, this is associated with a small amount of carbon emitted into the atmosphere. Let's follow one rough calculation I found on the Internet that suggests that a six-person Zoom call releases about 1g of CO2 into the atmosphere.

That is obviously less than the emissions produced if you traveled by air to a meeting, using ground transport from the airport, and probably staying in a hotel. Forget all the other stuff - a one-way flight from Frankfurt to London (say) has a footprint of 167kg of CO2. That's a one-way flight, and you'll probably fly two ways, and other people will be flying into the same meeting.

So can we take every single Zoom call, and say it has saved more than 150kg of CO2?

Obviously not, because not every Zoom call displaces a physical meeting. Some will replace more local meetings, and others will be additional meetings that only happen because the platform exists at all. (Those extra meetings are a whole different subject. Depending on how valuable they are, these additional communications can be a more intangible handprint, or benefit, of IT - or a time-wasting footprint on our own productivity, depending on your own experience).

Tech isn't justified by its handprint, but by its overall utility. But still, at least one person has attempted to score the Internet's handprint. Anders Andrae of Huawei, whose work on estimating the energy demands of data centers has been widely quoted (and criticized by many). 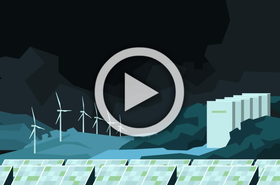 Andrae also attempted to estimate the positive carbon impact of the Internet, in his 2021 paper The Internet's Handprint, which we discussed with him earlier this year in the Zero Downtime podcast.

"Human-related global greenhouse gas (GHG) supply can be significantly halted if existing and developing ICT Solutions are used in other sectors (and in the Internet infrastructure itself) to cause a handprint," says Andrae. "Such solutions include products-sold-as-services, smart Grid, and smart metering."

The paper is a brave piece of work. It includes estimates of the total greenhouse gas (GHG) production of the human race, and then attempts to estimate the handprint of ICT. Importantly it looks at those claims for smart grids and the like.

Here, it becomes clear that even the best research will be based on very rough estimates. For instance, Andrae reckons that smart meters can save 0.81 Gigatons of GHG in 2030. Drill down and that is based on the following: "50 percent of all buildings GHG supply are applicable for 10 percent reduction using Smart Metering."

But how could it be otherwise? These are figures that are not collected precisely, and they are projected forward into a future that has multiple uncertainties. 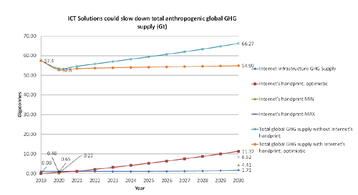 Andrae estimates that the Internet has a footprint of around 1.7Gt of GHG, but could have a handprint of as much as 11.37Gt - around ten times its negative impact.

He admits that could be an over-optimistic figure but, if true, it would produce a neat result. Earlier in the paper, he estimates that the world's total GHG supply will grow from around 52Gt to over 66Gt by 2030. If ICT produces his optimistic level of carbon footprint, it would almost completely offset the world's predicted GHG growth in the next decade (see the graph).

Even with this picture, I want to know more. How about the excessive emissions caused by cryptocurrency mining, an activity that I believe has no discernible handprint?

What about the sprawling masses of videos on sites like YouTube? What about Netflix? These are activities that have social impacts as well as their carbon impact. Do they have a specifically carbon-related handprint?

Andrae refers to all these aspects of tech usage. But there is uncertainty, and there are sides to the industry (like crypto) that are based on an unsustainable idea of growth.

Given all this, I don't think tech gets a free pass because of its benefits.

As Stephen Harper puts it: "As important as enabling the handprint is, the ICT sector needs to continue reducing its direct footprint."

The news here is actually good. Well-attested research by Lawrence Berkeley National Laboratories, carried out by another Zero Downtime podcast guest Dr. Arman Shehabi, found that, in the US in the 2010s, cloud and virtualization offset the emissions of a massive expansion in data center capacity. Research in the EU has found that electricity consumption of ICT products decreased overall because of increased efficiency.

The important thing is to keep working to reduce emissions, and to make our best efforts to get good figures, so we know (as far as we can) both our footprint and our handprint.