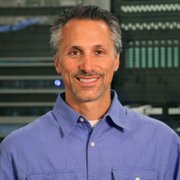 Gary has 20 years’ experience in the communications industry, with extensive knowledge in fiber cabling infrastructure.

The transceiver module market is changing; here’s how and why 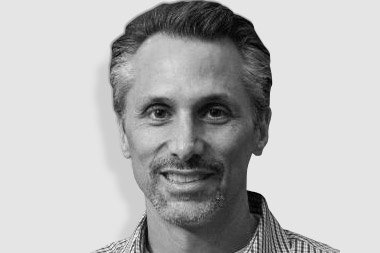 Data centers are rapidly evolving to address rising volumes of network traffic. Faced with demands for higher bandwidth and the need to adapt and scale quickly, many organizations with small or medium data centers have moved to cloud service providers or have outsourced to colocation facilities. Also, many large enterprise data centers with traditional three-tier architectures are moving to “flatter” leaf-spine architectures, creating lower latency and more scalable designs.

As these data centers adapt, one trend is clear: while both cloud data centers and enterprise data centers invest heavily in next-generation network infrastructure, they follow diverging migration paths, as they deploy different types of optics, network speeds, and cabling systems.

Today, while 10 Gbps transceiver modules make up a large portion of the market, 100 Gbps is starting to make a big move, driven largely by cloud environments. By 2018, eight speeds will be available on the market, including 200 and 400 Gbps, creating an unprecedented number of options for data center managers to evaluate and design their networks to support.

Narrowing to transceiver trends at 25 Gbps or faster, Figure 1 shows how 40 Gbps adoption will begin to flatten in the next two years. Interestingly, 25 Gbps transceiver shipments will grow in parallel with 100 Gbps. These two rates are related, and their parallel growth is largely the result of the 2015 IEEE802.3bm standard defining 100G-SR4, which allows for 100 Gbps using four 25 Gbps lanes over an 8-fiber MTP connection. 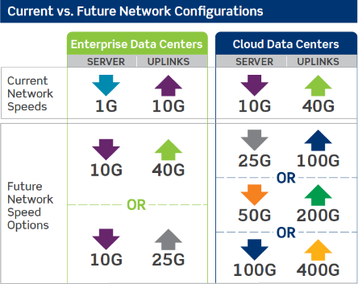 These 25 Gbps lanes enable the next wave of high-speed networking, as more data center tech refreshes will include 100 Gbps uplinks at the switch and 25 Gbps down to the server. The majority of these lanes — around 75 percent — will use 4-fiber or 8-fiber MPO/MTP connections for short-reach applications at 500 meters or less. Long-reach applications over single-mode largely use an LC interface over two fibers.

The migration path for enterprise data centers will take advantage of existing multimode cabling while moving to 10, 40, and 100 Gbps in the future. With over 12 different 40 Gbps transceiver options and 10 different 100 Gbps transceiver options available on the market, infrastructure engineers must design their networks to be flexible and able to support any of these potential topologies.

In 2016, Microsoft Azure, a market leader in cloud services, moved the vast majority of its data center fiber cabling to single-mode. In fact, Microsoft is now 99 percent single-mode, using parallel single-mode with MTP connections more than any other fiber type. Also, Facebook has undergone efforts to shorten their data center cable links to 500 meters or less. Actions like these from companies with such major purchasing power have reduced the cost of single-mode optics to the point where the cost for 100 Gbps single-mode optics dropped tenfold over the past two years, bringing it in line with multimode fiber.

As this trend continues, the market in general will find single-mode a more enticing option. For example, 100G-PSM4 single-mode technology, created in 2014 by a multi-source agreement group, is currently the same price as 100G-SR4 multimode transceivers. PSM4 transceivers were specifically designed as a low-cost option for 500 meters or less, using an 8-fiber MPO/MTP connection. Just as important, the price for long-reach single-mode solutions such as 100G-LR4 has dropped and will continue to drop over the next several years.