Never leave a superhero movie before the end, or you’ll miss the “stinger”, an extra clip with a surprise hint about future stories, embedded in the credits. At the Open Compute Summit in San Jose this year, the keynote had a stinger.

In Marvel Comics flicks, the stingers have introduced new characters to the universe, giving fans their first glimpse of the movie versions of Thanos and Nick Fury. Last week, at the end of the trailer for the next Captain America film, the big one happned. After two minutes of superheros shouting over loud explosions, it all paused, and then up pops Spiderman, previously tied up in Sony movies, and suddenly able to make his first showing in the Disney-backed Marvel pantheon known as the Marvel Cinematic Universe. 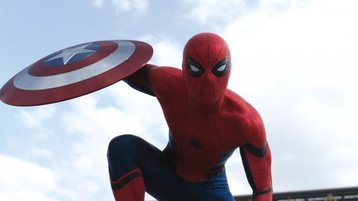 In San Jose, the keynote stinger was a similar scale: Google joined the Open Compute Universe.  Ever since Facebook started the Open Compute Project (OCP) as an open source buyers’ club for webscale giants, we’ve been wondering when and if Google would join. Now it’s happened.

But first there was a movie-length keynote: two hours of action as excited execs from Microsoft, Intel and Bell Labs bounded onto the stage to boost the OCP project.

Google’s technology VP Urs Hölzle wasn’t even on the agenda, but right at the end, he jumped in with the big news.

I have to confess, I’d left the room. I slipped out while a panel of telecom executives were agreeing with each other at some length about the Open Compute Project’s telecoms group. I had a meeting with an OCP member who was equally disappointed to have missed the Google stinger.

The announcement is significant. Facebook open sourced its hardware architecture by setting up OCP five years ago, and since then people have been asking if the other web giants will follow suit.

Microsoft signed up in 2014, sharing its server designs, and the company’s Mark Russinovich announced Microsoft is sharing its SONiC network software during the keynote-a-thon (also pleading Microsoft’s case as a good open source citizen).

Google does play well with open source software, but it has mostly kept its hardware designs to itself, so its presence in OCP was rightly seen as a Big Deal.

However, we’ll need to look at the detail of what is being shared as this emerges. It’s well known that Google uses a 48V bus bar in its rack designs, and this is what is coming to OCP. However, it hasn’t actually been shared yet, and apparently Google and Facebook will work up something between them to share through OCP.

In other words, this is not Google’s server designs, and it’s not its network designs. A tiny glimpse of how its network is put together caused a major stir in June last year. This is something which Google feels is not a strong competitive secret, but is something where sharing it will bring overall benefits, by increasing the availability of kit.

As Hölzle put it, it makes sense to release “non-core” technologies as open source, so “everyone benefits from a standardized solution.”

There is already plenty of 48V expertise out there, as this means of distribution is long established in fields including the military. It’s also a standard in telecoms installations. So Google’s arrival may have some connection with the new telecoms group in OCP, as the group now has a lot of members with expertise Google might want to share.

On this site, Ian Bitterlin has suggested that 48V distribution may be more suited to the US market than Europe, so the actual technology shared may not travel as well as some could hope.

But this does suggest that the separate worlds of telecoms and IT facilities are continuing to blur. Straddling the worlds of IT and communications is, after all, a defining feature of the cloud.

So this announcement is part of OCP’s expansion, and we can expect that other sectors and vendors will arrive, when it becomes obvious that their own industries need to figure out how to relate to the market for commodity cloud hardware.

The biggest hold-out at this point is, of course, Amazon. The leader of the public cloud industry keeps its own hardware so secret that even an Amazon executive famously used a picture of Google’s network when he couldn’t find one of the kit that actually runs Amazon Web Services (AWS). We’ve probably got a long while to wait before Amazon starts to share.

But on a personal note, what I’ve learnt is - don’t leave the keynote till the credits have rolled.