Using SmartNICs not only improves CPU core and server efficiency, it also eliminates the need for hardware silos and simplifies infrastructure as well as inventory management

Servers and the space, power and cooling they require can account nearly half of data center operating costs, so data center TCO reduction efforts are most effective when they focus on server efficiency.

Network protocol processing is one of the major drains on server performance, accounting for 50 percent or more of CPU cycles, causing data center managers to continually buy more servers to keep up with networking and application workload processing. By offloading network protocol processing from servers to SmartNICs, data center managers can cut server counts and reduce TCO between 2X – 6X.

SmartNICs for fun and profit

Unlike a conventional NIC, a SmartNIC incorporates a programmable network processor that can be used to run various networking tasks such as Open vSwitch (OVS) or Virtual Router (vRouter). Using SmartNICs impacts three components of data center TCO – per-core efficiency, per-server efficiency and TCO for the entire data center.

The first aspect of data center TCO is per-core efficiency, or the number of CPU cores required to get to a certain level of performance. By offloading the networking tasks from the CPU core to a SmartNIC, you are essentially increasing the amount of traffic you can handle on a per-core basis. When SmartNICs are used, most of the switching or routing functionality happens on the NIC, so the core can be used to run applications. Using a SmartNIC raises per-core efficiency by 20X – 50X. For example, OVS datapath offload to the SmartNIC provides 50X per-core throughput performance compared to Kernel OVS and 20X per-core throughput performance compared to User OVS.

The second aspect of data center TCO is per-server efficiency. Tasks such as vRouter or OVS can require 50% or more of the CPU’s processing power. Those are valuable CPU cycles that could be used for applications, so by offloading those tasks to a SmartNIC, you are raising the server efficiency as well.

The third aspect is TCO for the entire data center. When data center managers implement multi-tenant clouds or service provider 5G services, they often create silos because there is no common infrastructure for implementing those services. One service might require OVS as the NFVi foundation with 12 cores allocated to OVS since the VMs are high-performance VMs. A second service may require vRouter, since it needs layer 3 routing and 8 cores allocated to vRouter since the VMs are medium-performance VMs. A third service may need firewall or NAT service along with OVS and 16 cores allocated to OVS DPDK, because the VMs deployed are high-performance and need the security as well.

When a SmartNIC is used, it can tune the services using the SmartNIC and use a common hardware infrastructure across the board. Then, if the service needs OVS, OVS software can be downloaded. If the service needs vRouter, download vRouter software. For services that just need a basic NIC, use basic NIC software. A SmartNIC changes the personality of the NIC and uses a common hardware infrastructure. This results in a homogenous hardware platform that can be programmed and scaled on-demand using software packages resulting in a real “elastic” cloud from the ground up.

Using SmartNICs not only improves CPU core and server efficiency, it also eliminates the need for hardware silos and simplifies infrastructure as well as inventory management. It reduces the amount of spare capacity that must be maintained, and it reduces the number of SKUs and vendor relationships that must be maintained. Essentially, SmartNICs allow end users to use software programmability to leverage the hardware infrastructure more efficiently. Selecting the right SmartNICs can provide the best price-performance as well as a truly elastic on-demand cloud with a pay-for-use model where you only pay for the services or applications you need. 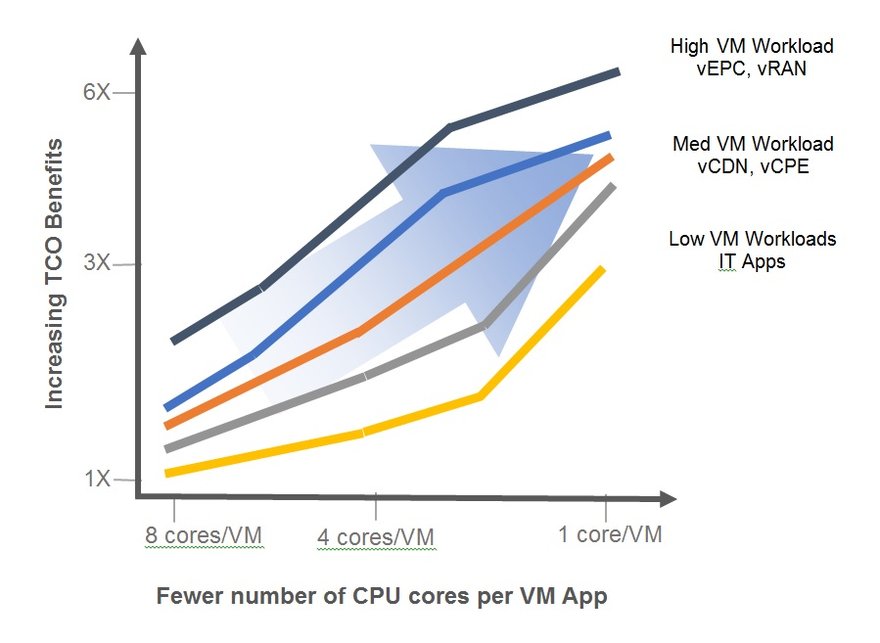