Last month, we heard of plans to build “Europe’s largest data center” in a labyrinth of tunnels in a Norwegian mountain, the remains of a worked-out mine. It turns out there is a little more to the story.

The Lefdal Mine Datacenter is being proposed in in the site of an old mineral excavation between the west Norwegian ports of Måløy and Nordfjordeid. Cooled by salty fjord-water (presumably indirectly), it has abundant hydro-electric power, up to a million square feet of space and - we expect - an enviably-low PUE.

It’s backed by IBM, and Fridholm Loh Group, the parent of cabinet and container-meister Rittal. But despite all this, not everyone is that excited about it. 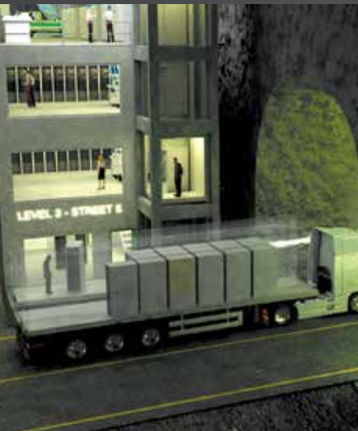 The million square feet we mentioned is actually a potential figure, and it’s starting with quite a lot less, because this a data center that is colonising its underground labyrinth like an ant farm or a bee hive, setting up cells along the tunnels, as required..

Three floors of conventional data center space will be constructed in one of the tunnels left behind by the original miners. The rest of the tunnels will be populated bit by bit, using containerized data centers built to order, shipped to the site, and parked in the tunnels.

These tunnels (or “streets” as the company calls them) are big enough to take three containers stacked on top of each other, along each side of the tunnel. Perhaps more impressively, the tunnel system is generous enough to accomodate the articulated trucks and hoisting gear needed to get the things in place.

At present, the site’s only two tenants are its backers. IBM is planning a disaster recovery set-up in the conventional data center halls, and Fridholm Loh has some unspecified usage planned. But anyone else can order up a container from Rittal when they want to move in.

The positive side of this is that these containers can be fitted out to customers’ needs and shipped quickly. The company says a customer can have its own space in place, and hooked up to the mine’s power, cooling and fiber, within six to eight weeks.

But others are more skeptical, with some claiming that customers in other countries won’t want their servers somewhere so inaccessible, and that the savings - both financial and ecological - won’t justify such a big change from existing procedures.

Among the skeptics you can probably count the former investors in a plan to put a data cenmter on the site - HP and a Norwegian public sector body.

In 2012, HP signed up to develop the site with Entra, a Government-owned real-estate firm charged with managing public assets.

Despite a positive launch, it seems the project got bogged down during 2012, as questions were asked whether Entra should be undertaking such a risky project so far from its core real-estate skills. In October, two-thirds of the venture was sold to the newly-formed Lefdal Mine company, and HP seems to have left the scene. .

Since then, the company has found new partners for what is effectively a re-launch. The new scheme has more going for it: the use of containers may not be so fashionable for large projects these days, but it fits the premises, and the data center market is more buoyant than in 2012.

But still, let’s remember that any large project is a risk. It may claim multiple victims in its lifetime. And with a container-based modus operandi, the new prospectors in the mine may have hit on the best model to exploit it.