The data centers they couldn't kill

Elliptical’s rugged mobile data centers are back from the grave

One of the pioneers of edge data centers has just re-emerged in a new form, after going bankrupt in 2015. Elliptical Mobile Solutions made all-in-one edge boxes, and had some early success with customers like AOL. But it foundered in 2015.

Now, a buyout financed by a web marketing company has put Elliptical’s assets into the hands a new and enthusiastic-sounding company, Instant Data Centers, based in the same Arizona city, Gilbert. 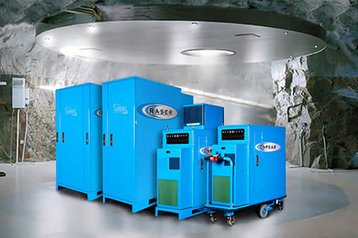 They just keep rolling along

Elliptical was really interesting because it made one of the first attempts to seal racks or half-racks into solid cabinets, with all the power and cooling they needed on-board. Some of its products were also self-propelling, with electric motors enabling them to be delivered direct to wherever they were needed, and rolled into place. All these cabinets required was some flat ground, power and Internet.

And they had evocative names. “SPEAR” for instance, a 21U module with power up to 6kW, was a “self-propelled electronic armored rack”.

The new company, Instant Data Centers (IDC) was created explicitly by people interested in the EMS patents, but CEO Russ Dailey tells me IDC wasn’t sure the courts would rule in its favor, so it’s been getting on with research, aiming to develop a line that won’t focus so much on the ruggedized outdoor models that EMS made.

“EMS’s entire line is outdoor rated and a lot of the current units ended up inside,” he told me. “With this in mind, IDC wanted to create a line that would cool as efficiently as an EMS product but at less cost to construct and deliver to the end user.” the IDC products need a roof over them.

Back in the day, EMS was offering “edge” data centers, before the world really knew it needed them

IDC now has the rights to sell the EMS products, under their old names, but the new products sound more suited to the new world of edge data centers where any building might need a small data center to handle local streaming or IoT needs. IDC is also adjusting the EMS products so they can be available with a variable speed compressor, so they are more efficient and can be better suited for people who need less than 7.5kW per rack, Dailey says.

“Mainly we want to have all the options available to us so can provide a customized solution to a customer at a mass manufacturers price,” he told me.

Back in the day, EMS was offering “edge” data centers, before the world really knew it needed them. AOL was talking about distributing its data processing needs, but then its business went bad.

Since then, everyone has come to realize how important the edge is, and these new versions sound well suited to today’s world.

Maybe Elliptical was just ahead of its time.