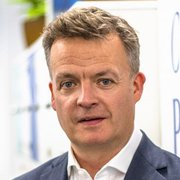 How often do you consider data centers as architecture? I recently participated in an interesting evening in the curvaceous cavern of London’s Roca gallery, which did just that. The gallery hosts the current Power House exhibition, and curator Clare Dowdy chaired three very different presentations for the panel event ‘Data Center Design — What’s The Future?’. 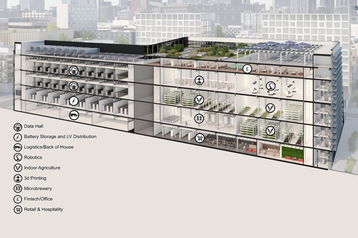 Combining a data center with other users – Scott Brownrigg

Mixed use, close up

First off was ‘Mixed Use and Close Up’ from Martin Wright, director of architects Scott Brownrigg. With the need for low latency, rising demand and the “availability of land near towns in short supply”, he proposed urban buildings combining a data center and with other functions.

Indoor agriculture, fintech offices, retail, 3D printing and even a microbrewery are incorporated into a four-storey concept design of two halves. Not exactly a discrete urban feature, his battery-supported DC half of the building was bright white and stepped forward from the multi-use half. My feeling was that infrastructure and real estate assets were different markets.

He didn’t offer precedents for them combining, but they can be put together: airport terminals and rail termini have become shopping malls, for example. 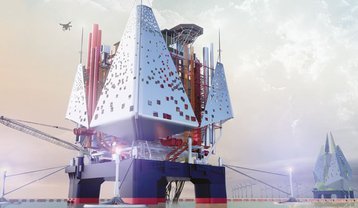 They look like high-tech thickets of tubes behind triangular screens, which presumably act as radiators and wind shelters. There was less detail about the data center element, in a presentation about how rig structures can host new and vibrant ecosystems. I wondered if flare gas could power trial projects. There’s plenty of wind out there, and undersea cables for connectivity, but for me the challenge is how to make a scalable data center, in order for the project to be commercially viable.

I also wondered whether their location could provide the latency that is essential for machines like drones or autonomous vehicles, which Wright had discussed.

Beyond the Cartesian enclosure

Marina Otero Verzier, now head of MA in Social Design at Design Academy Eindhoven, entitled her presentation ‘Beyond the Cartesian Enclosure’. She set the scene by telling us that the Netherlands, which intensifies its use of scarce land with technology, recently blocked Meta from taking a chunk of it for Europe’s largest data center. She then showed a grid of coloured brine pools at a lithium mine in Chile to illustrate how “the creation of alternative digital futures and worlds is putting at risk the only one we all inhabit.”

The fun part was seeing graduates’ ideas from the Royal College of Art’s School of Architecture (see gallery below), which she tutored on a course addressing data centers and “posthuman institutions”. As well as offshore data centers again, visions included micro-data centers on your wall under the window.

Helena Francis’ haunting ‘cyborg future for the data archive’ was about biotechnology. As Otero pointed out, with DNA-stored data “the entire Library of Congress could be contained in every cell”, and it would “rewrite human history”.

The event offered ideas ranging from imminently feasible, like Wright’s mixed-use buildings, to over-the-horizon, like biotechnology, but the potential disruptor of quantum computing wasn’t mentioned. To my mind, the most vital message was Otero’s ecological warning.