Zetta isn’t that a big a number…

As it turns out, Zettastructure isn’t much of a target

A couple of weeks ago I was sitting in the sunshine on a beach in South Wales contemplating my next imminent round-the-world trip. Starting off in Pittsburgh talking about SiC based UPS (that is 99.3% efficient in double-conversion mode) I was then bound, via Denver and San Francisco, for Singapore - to attend DCD >Zettastructure and then deliver energy training for DCPro. So, energy was on my mind.

If you know the part of the South Wales coast between Cardiff and Port Talbot (Trecco Bay to be precise) then you will know that you can look across the Bristol Channel and see the towering heights of Exmoor between Lynton and Minehead, about 30km to the south. The tide was out and the harbour wall of Porthcawl was sticking right up showing the water-line from the high-tide. As the moon drags the water up the channel it is forced to rise an impressive 9.53m (I Googled it on my phone!) in 6.24 hours.

So, with nothing to do but watch Jack (my cocker spaniel) go berserk in the sea, I contemplated the energy applied to the body of water I could see. I decided that in my field of vision was about 3km from Porthcawl to the west and Ogmore to the east so decided just to work on that slice across to Exmoor. 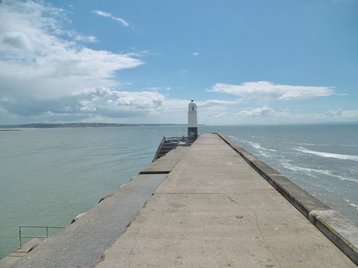 Many times it has been proposed to build a barrier to capture the tidal flow and I was curious to calculate the capacity. So 90km2 times 9.53m = 858 million m3, weighing about 8.58 x 10^11 kg. After a bit of Sanskrit and fiddling with the calculator in my phone (where would we be without them) I worked out that moon applies 3.57GW over the 6.24 hours – over 22 million kWh, twice a day. The Bristol Channel narrows quite quickly but even this 3km slice represents a big power station, capable of feeding well over 10% of the UK grid demand without any fuel. Of course, it would spoil the view but my thoughts had already gone back to data centers and Zettastructure.

My numbers were big but not as big as a Zettabyte and I was a bit disappointed. Until that is I compared 1kg of water with a byte! The energy locked inside 1kg of water (if used to produce fuel for a hydrogen bomb) is massive so I decided to Google ‘how many molecules (H2O) are there in 1kg of water’. Well, now we were ‘cooking with gas’ as the answer is 3.344 x 10^25 and when I multiplied that by the number of liters that the moon drags up to Bristol we get a very impressive 2.86815 x10^37 or, more simply put, 2.86815 x 10^16 ZettaMolecules – which is now 2.86815 x 10^13 YottaMolecules. In other words inconceivably greater than a single ZettaAnything.

Of course, the reality is relative (as good ole’ Albert said) and if you start off with something very small it is easy to reach very large. And then I thought of the obvious – how many atoms are in ‘me’? The answer is 10^28, many, many, ZettaBitterlins. Now you know four things:

So off to do the three days of training then back to London via Doha… Always travelling against the incoming tide.