Look to the skies for an innovative approach to cooling

When trying to cool a data center, consideration is often given to outside temperatures, to the cooling capacity of chillers, and the airflow of fans. Less thought is given to the coldness of space, the vast bleak void that envelopes us all, just begging for warmth.

That may change, with a small startup planning to take advantage of radiative sky cooling, a fascinating natural phenomenon that allows one to beam heat into space. SkyCool has begun to develop panels that emit heat at infrared wavelengths between 8 and 13 micrometers - which are not absorbed by the earth. 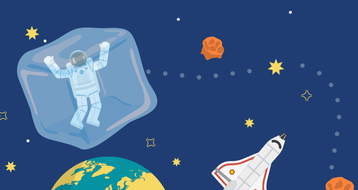 The coldness of space – Mar Perez/DCD

“This essentially allows us to take advantage of the sky, which it turns out is very cold,” SkyCool’s co-founder and CEO Eli Goldstein told DCD. “And more broadly, space is the ultimate heatsink and is around three kelvin - it’s extremely cold.”

While the phenomenon has been known and studied for centuries, the company’s panels, made out of a thin layer of silver covered by layers of silicon dioxide and hafnium oxide, can remove heat during the day - a first.

A prototype of the system was installed on a two-story office building in Las Vegas in 2014. Under direct sunlight, the panel remained 4.9˚C (8.8˚F) below ambient air temperatures, delivering “cooling power of 40.1 watts per square meter.”

“What our surfaces do, is they’re able to not absorb heat from the Sun, but at the same time they’re able to simultaneously radiate heat to the sky in the form of infrared light. And that combination of properties has really never been present in any natural material, and it’s been very difficult to make up until recently by design,” Goldstein said.

The startup was formed by three researchers from Stanford University: Goldstein, his post-doctorate advisor, Aaswath Raman, and his professor, Shanhui Fan. SkyCool was started last year to commercialize the research first carried out at Stanford.

“At the end of this summer, we hope to have a couple of installations in California,” Goldstein said. “After that the plan would be to deploy panels in more locations and scale up.”

The company hopes its panels, which circulate water-glycol, will find success in sectors that require high cooling loads - data centers, the refrigeration sector and commercial cooling.

“Early on we’re more focused on edge data centers,” Goldstein said. “I think there’s absolutely interest in the larger ones: provided that you wanted to cover the entire load, you would need to have adjacent space for the panels, not just the roof. You could also use the panels in conjunction with traditional cooling systems to reduce water use from cooling towers, or electricity use from cooling in more traditional ways.”

He added: “We’ve had a number of conversations with data center companies. I think the biggest challenge for us right now is, because we’re such a small company, to think about a 5MW data center or more is a lot, it’s a big installation for us.”

Another challenge, he said, was that “unfortunately, no one wants to be the first person to try a technology, especially at facilities like data centers. We know the technology itself works - I can heat up water and pump it through the panels and show that we can cool the water. The next thing we need to demonstrate is not on the technology side, but on our ability to execute deployments in a cost-effective way, and tie it into actual systems.

“The energy side of things is pretty straightforward, we know how much heat needs to be removed, and how much heat can be removed by a panel, now it’s about how we do that at scale.”