Aligned Energy sounds like an electric utility, but CEO Andrew Schaap says it can serve any size of colo customer thanks to innovative cooling and strong backing

The first question you have to ask about Aligned Energy, is why is it called Aligned Energy? It’s a data center company, and that name sounds like a utility. Sure, there are plenty of other data center providers with stranger brands, but Aligned’s moniker actually hints at where it’s come from, and what might be different about it.

A couple of years back, Aligned Energy was a technology-focused data center operator with multiple businesses. Under its Aligned Data Centers brand, it delivered colocation space with a guaranteed PUE (power usage effectiveness) of less than 1.15. Some of the technology to enable that came from another subsidiary, Inertech, which had a patented heat rejection system, broken into its component parts and distributed, to focus cooling onto the racks with the greatest need.

The company also had its own DCIM and design subsidiaries, and the company’s founder and then-CEO Jakob Carnemark sourced other energy-efficiency technology from the frontiers, like heat reclamation devices designed for maritime use made by Climeon. 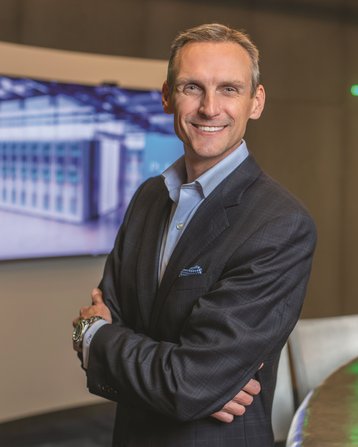 That structure changed in 2017. Andrew Schaap was brought in as CEO, after an 11-year stint at Digital Realty, where he rose to senior vice president of global operations. Aligned was briskly restructured: the DCIM and design businesses are gone, and the Inertech brand disappeared.

“When I came on board I made a hard left turn, towards making the technology much more designed for hyperscalers,” Schaap told DCD. “We are aligning our business strategy, technologies and infrastructure closely with [those customers’] needs and requirements.”

Inertech became a research and development department for Aligned, led by Michael Coleman, a previous data center operations leader at Google. The patented cooling products - the Delta Cube cooling array and the Cactus heat rejection system - got re-designed for hyperscale use and are not now available to competitors, Schaap said.

“I've simplified the design. I've taken it and super-sized it into this really large form factor, which is optimized for large wholesale facilities,” he said. “It’s simplified and enlarged. The fans are bigger, the coils are bigger, which enables me to get a better cost per kW. But it also gives me the ability to scale to a much larger footprint.”

The Delta Cube units are fitted in arrays, to create a fan-wall, which moves large volumes of air, and doesn’t need to move it with high energy or high speed, says Schaap. There are a few equipment vendors selling similar low-velocity, high-volume systems airflow systems, which can be more efficient. “Our customers don’t need to worry about exotic cooling solutions or CRAH / CRAC systems with a large number of moving parts to maintain. Aligned’s Delta Cube has one moving part.”

Aligned populates fan-walls incrementally, with blanking panels covering empty columns. “We may build, 200W per square foot, If the customer wants to expand in three years, we can come back, take out the blanking panels, and add those Delta Cubes.”

The upgrade is fast: “We’re able to provision initial capacity deployments of 2-20MWs, and scale beyond that in as little as 12 weeks​. For smaller scale projects, such as small to medium-sized enterprises looking to expand in our existing sites, we’ve been able to deploy in as little as 30 days.” 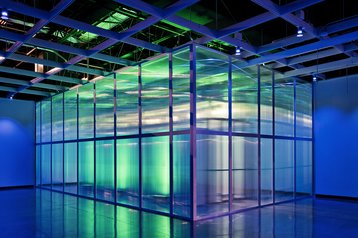 This is important, as power densities are increasing: “While the market is seeing averages of 11kW per rack, we’re seeing 20, 30, 40kW per rack in some of our deployments. The proliferation of technologies such as AI, IoT, VR, and blockchain will call for considerably more compute, thus generating more heat, and prompting customers to look at higher-density cooling solutions.”

We’re surprised to hear such a technology-based pitch from a wholesale colo provider, when wholesale giants like Digital Realty and CyrusOne tell us that the hyperscale market has made such specific demands on wholesale colocation that it seems the market is just a competition based on nothing but cost and delivery time.

Schaap reckons his technology pitch works because Aligned is... well, more ‘aligned’ with the hyperscalers’ own work than the other wholesale colocation builders. In recent years, it seems it has won big deals with hyperscalers, that had previously been slated for build-to-suit or build-it-yourself.

“We're doing slab on grade, with no raised floors, and an open air ceiling, so our sites look very much like the sites those hyperscalers own and operate, not the facilities they buy wholesale.”

The cooling arrays (Schaap won’t use the word “fan-wall” as it’s someone else’s trademark) are also familiar to hyperscalers: “They’ve been around for 50 years. Amazon, Microsoft, Google, everybody's using them in some form or fashion. Even Facebook use them up in Prineville.”

There’s a difference, though, which may give Aligned’s ideas a wider appeal: “Ours is a closed loop system versus an open system. It doesn't use any outside air. We can still win big financial services or Fortune 500 firms, who might feel that what Facebook does is too risky for them.

“Ours is in that great middle ground. It’s more advanced than any colocation operators, but it's not so specific to one hyperscaler that it would hurt our ability to win deals with the enterprise or other technology companies just below the hyperscalers.”

Returning to speed, Schaap tells us how in Salt Lake City, Aligned turned a former Fairchild Semiconductor facility into a data center, and had a customer in place in six months. In Ashburn, the company built two data halls with 12MW of data center space, expandable to 60MW, in less than six months, which Schaap says is “among the fastest building permit-to-commissioning construction projects in the history of Ashburn's critical infrastructure.”

This speed is made possible by advanced site selection and good supply chain methodologies, he said. “We don’t have any loss on our mechanical and electrical plant (MEP) or stranded capacity in our buildings,” and Aligned uses modular power and cooling, with electrical and mechanical inventory prefabricated and tested in the factory before delivery.

All this requires finance, and Schaap describes his backing as “sophisticated” capital, with investors that “understand infrastructure, and have committed to supporting the company’s growth.”

Which brings us back to the company name. Aligned is not an energy company, but it’s connected to that world.