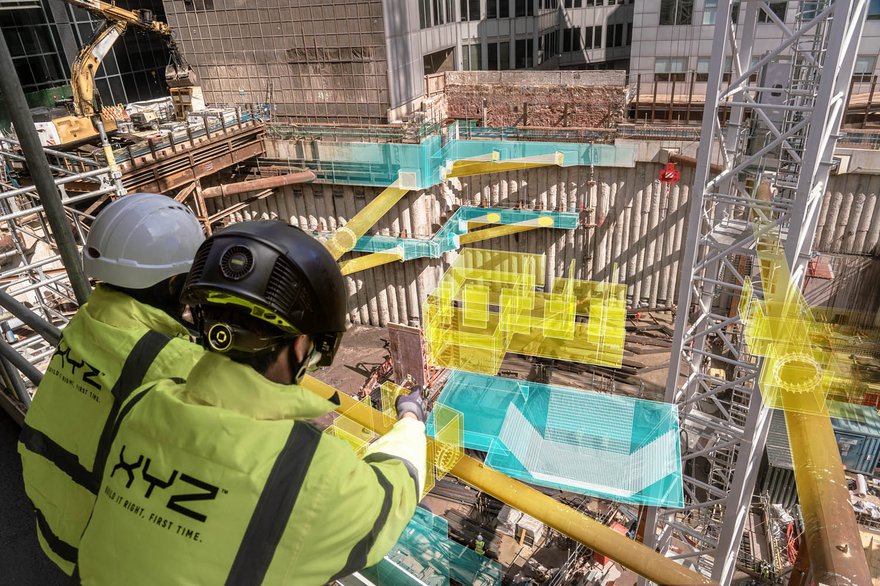 Construction might seem like the ultimate muddy-boot occupation, but there’s a company aiming to disrupt it with augmented reality (AR). And unlike a lot of AR headsets, this is not just a high-tech toy: XYZ Reality reckons that a high-tech hard hat on an engineer’s head can pay for itself in six months.

It’s hard to grasp the proposition at first. The XYZ Reality Atom headset looks more like a futuristic bike helmet than something you’d see on a construction site. Shimmering mirrors glint inside the goggles.

Videos of the HoloSite AR system show virtual buildings springing into existence before the engineers’ augmented eyes. But CEO and founder David Mitchell is very definite that the headsets are not enabling science-fiction castles in the sky.

“I do like sci-fi,” he tells us. “But I am very much focused on the human aspect, and this can allow humans to build better.”

As perceptions change and technologies evolve, what is coming next in data center automation?

The headset includes laser-driven AR that is accurate to within 5mm, and can load up schematics for every aspect of the building including civil, mechanical, architectural, and structural, so the wearer sees the electrics, pipework, and the eventual physical structure, all overlaid over the current state of the project.

“The value proposition is, build it right the first time,” Mitchell tells us. “The industry is plagued by rework.”

All building projects suffer when parts are not quite correct, and need to be worked over, he says: ”Seven to 11 percent of each project is rework. That is wasted effort.”

AR can change that, he says, citing a very concrete example from one project. “After they broke ground, two months in, we came onsite with the headset, and they spotted problems left, right, and center.”

One concrete pad had been made 500mm too high. “That would have incurred substantial delays later,” he explains, “It normally takes two weeks to identify that kind of error. And if you verify the work after it is completed, the cost has already been incurred.”

“The value proposition is, build it right the first time. The industry is plagued by rework"

With a two-week delay, the project managers would have been faced with the choice between knocking down the work so far, or engaging in expensive adaptations. As it was, the fix was relatively quick.

But the benefits could have been far greater: “That’s using our tech as a reactive process. Drive it deeper into the quality process, and you can go in advance.”

If the AR system had been in use at the start of the project, the error would never have occurred. It would have been spotted and fixed when the rebar was installed, before the concrete was poured.

Mitchell has a family background in construction. He learned to walk on his father’s building sites on the West Coast of Ireland and got involved in commercial construction, helping to build small tower blocks and hotels.

“Then I became a bit of an architect,” he says, studying the subject and working in Paris for a time. “But I missed the construction side, and moved back to London. I got involved in some incredible projects - like the Shard and Battersea Power Station.” 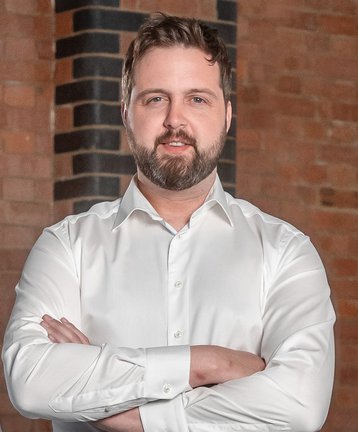 He also helped build hyperscale data centers in Europe, though he’s not saying who the clients were.

“I started questioning why builders use 2D drawings on-site,” he tells us. Architects and engineers use 3D CAD systems and the designs exist as BIM (building information modeling) data. But on-site, the construction staff have to work from a hard copy, which holds less information and is fiendishly hard to marry up with the real world.

“As an architect, sometimes I struggled to understand my own drawings,” he says.

Working for J. Coffey Construction, he wanted to give the building workers something better. “Back in 2015, we deployed paperless constructions on a building in Ireland,” he says. The project gave the builders more direct access to BIM data. “It was a huge success - everyone was sold on the idea.”

At that stage, he could see the potential, and wanted to take it further. He told his firm: ”This is the future. I’m going for it.” And Coffey agreed, giving him pre-seed funding.

Five years later, XYZ Reality has 70 staff. Backed by $26.5 million in venture funding, its headsets have showed up at projects worth a total of nearly $2 billion.

Data centers are a major part of its market - albeit a secretive one. All Mitchell will say about a major current project is it’s a hyperscale data center in Europe. Elsewhere, however, XYZ’s partner PM Group mentions Denmark, so we can be pretty sure we’re talking about the Meta/Facebook site currently expanding in Odense.

XYZ designed a health and safety compliant helmet, with waveguides to project a hologram in front of the wearer’s eyes.

The company opted for a laser-driven positioning system to improve the accuracy over consumer-grade AR systems which sometimes use cameras for positioning: “You cannot rely on feature points and the camera position.” 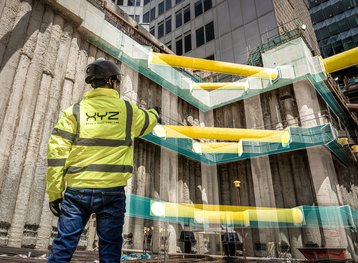 The positioning system works with a site coordinate system to give millimeter accuracy, and the images are validated by laser-scanned reality capture.

“There are a number of prosumer devices that are marketed in a way that makes this kind of thing look feasible, but we quickly realized that, for AR to be usable, it needs to be accurate within construction tolerances.”

Prosumer devices like Microsoft’s Hololens can often drift by 100mm, and be affected by factors such as sunlight he says: “We guarantee we can position AR with engineering-grade accuracy.”

Those holograms can show different disciplines including civil, mechanical, architectural, and structural engineering.

“We are 3D creatures. It makes more sense to see things positioned accurately,” he says. “When someone puts on that headset, they get a big smile on their face.”

He sums up: “Ultimately our vision is builders building from holograms.”

Data centers - the perfect use case

Historically construction is seen as conservative, but data centers are more aware of the potential of technology - and they also have a skills shortage that has become acute during a surge in demand for new facilities.

Those facilities are also often very similar, with one providing wanting to build the same building, over and over again And that’s a big opportunity for a new data-driven technology to show its worth.

“Data centers are cookie-cutter projects, so we can measure benefits directly against previous buildings,” says Mitchell. Data center builders that adopt AR can directly see that, where one project required 10 percent rework, the next one needed less than one percent.

Given the large costs of that rework, he says the return on investment can work out well, with one system paying for itself nine times over in six months: “The drop off in rework happens instantly.”

“Data centers are cookie-cutter projects, so we can measure benefits directly against previous buildings. The drop off in rework happens instantly.”

It’s also been used to verify the equipment going into the data center. “We have done factory witness tests, streaming into the factory environment.” In these tests, engineers measure skids of equipment designed for a data center before they are shipped.

“We’re able to check that the site can host it accurately, and all key interfaces are built correctly."

Mitchell won’t say how much the headsets cost, explaining that they are provided as-a-service “The cost depends on the duration of the project. We have a subscription model, charging per unit per month.”

This means that customers can increase the number of users with headsets as required, during construction peaks, and can roll on headsets to new projects. “One project started with one headset, now it has three, and it’s moving to eight-plus. They keep coming back for more.”

Can you automate it?

But can the system evolve into a level of automation? Mitchell says it already allows for an increase in productivity from existing workers: “This industry is suffering from a massive skills shortage. Giving this to people in the industry, assisted reality will assist them in building what they are building.”

The system also allows remote staff to share the view from the headset: “We are happy to stream into the headset,” he says.

“We prioritized streaming and remote working as soon as the pandemic came in,” he says. “We wanted to help the market.” 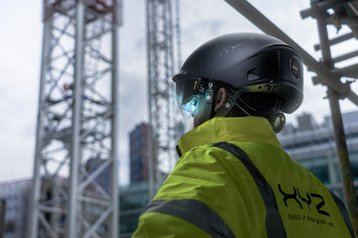 Adapting what the company had XYZ patched users into Teams calls so some customers would work remotely on-site using Teams and HoloSite.

“We reduced the amount of labor and travel,” he says. “40 people streaming into a headset were able to do a virtual handover and walk down of the project.”

He doesn’t see it going further any time soon, where are a robot or drone provides the remote eyes. “We are not potentially replacing people. We can delay the invasion of the robots. But we could feature ‘cobots’ that interface with people.”

So the headset isn’t a step towards a self-building data center, but there are fascinating additions in the pipeline.

“The next phases involve ‘assisted reality’” he explains. In this development, the headset can monitor aspects beyond the current user’s job definition, and passively detect what’s been done on site.

Once again, it’s about spotting errors, but in a wider context. The system can be worn by a construction worker, and passively detect a mechanical system is out of tolerance. It would then pass an alert directly to the mechanical engineering team - assigning the work to the right people automatically.

“We might have made mistakes historically,” says Mitchell. “Now we know it will be built right first time.”

Plenty of virtual reality and augmented reality headsets have already been seen in working data centers, and in virtual simulations of them. Some have been demonstrations or prototypes, while others have helped with troubleshooting.

Describing it at the time as a “flight simulator for data centers,” Sherry told DCD. “We can start a fire in the data center, or flood it, or make a tank come crashing through it.”

During the Covid-19 pandemic, Microsoft's cloud operations team used the company’s HoloLens 2 AR glasses to conduct data center audits remotely. This allowed the team to comply with Covid-19 precautions and made the inspections quicker and cheaper.

The team used Microsoft Dynamics 365 Remote Assist running on its Azure cloud, with HoloLens 2, having first assured themselves that the Azure platform complied with standards such as the PCI data security specifications.

Meanwhile, some hardware manufacturers have added AR capabilities to their remote management products.

The company launched Closer, a set of interactive step-by-step guides to help less-technical staff get through troubleshooting tasks. It also offered a product called Raise for remotely guided repairs and maintenance of ABB products.