Lithium-ion batteries could save money as data center backups. The trouble is, they have to live down the exploding Galaxy Note 7

The coming lithium-ion UPS revolution has been prophesied for some time, with lead acid batteries long seen as a technology of the past. On paper, it’s easy to see why people have thought this - Li-ion is lighter, it’s smaller, and it lasts longer. Surely, it is the superior technology, one might think.

And yet, here we are in 2017 and the only viable competitor to valve-regulated lead acid (VRLA) seems to be the flywheel. Why is this?

Starting with a bang

One of the major problems some have had with Li-ion is its tendency to explode. “Just like with terrorists, there are too many bad stories of Li-ion in the news, people are intimidated,” Schneider Electric’s Simon Zhang told DCD.

“People see explosions everywhere, from hoverboards, to Boeing, to cellphones.”

Perhaps most prevalent on the public’s mind is what happened with Samsung’s Galaxy Note 7, which had to be recalled after units kept catching fire.

“They don’t want to risk their facility with this relatively new technology, even though it’s been there for 30 years.”

Peter Stevenson, senior technical coordinator at GS Yuasa Battery, agreed: “If you lose a data center, the costs are so much more than anything you’re going to save on fitting a different battery, so I can see why the reticence is there.”

Indeed, the idea of filling one’s data center with a host of giant Galaxy Note 7s could seem rather off-putting, but “that’s why it’s mandatory to have a battery management system (BMS),” Zhang said. “If anything goes wrong, or there are any safety concerns, it will shut off the battery, take that string of batteries offline.”

This safety feature differentiates it from the exploding device in your pocket: “Because we have the BMS, we have the whole visibility of the battery’s performance. You can see the remaining capacity of the batteries, when it needs to be replaced, etc. All this information will become really valuable.”

It also differentiates it from lead acid, Stevenson added: “With lead acid, really the only way to know that it’s going to work and perform as necessary is to actually do a discharge on it - it’s a bit like Schrödinger’s cat. But if you do that every week, then it’s not going to last so long.

“Li-ion will soak up a cycle a day for ten years quite happily, so you can see how things are changing day by day, so really Li-ion is the ultimate security battery,” said Zhang.

Unfortunately, if done poorly, a BMS can bring its own risks, particularly due to incompatibility, said Zhang: “I heard that the Boeing incident was caused by the battery vendor and the BMS vendor being different.”

This difference between vendors is an issue still plaguing the nascent industry, Zhang continued: “At this stage it’s a pretty fragmented market, the batteries are not standardized, even the voltages are different, the chemistry, the form factor, technical specifications, everything is different.”

“That’s why you see so many incidents, all due to the fact that the safety standards are different from manufacturer to manufacturer.”

Stevenson concurred, adding that “there are many alternatives, but they all use the same principle of shuttling lithium-ions backwards and forwards. There’s a mass of different materials that can be used, and they’re developing all the time, and they have some quite different characteristics which make them suitable for different applications.

“If you only make one type you tend to push that for everything.” 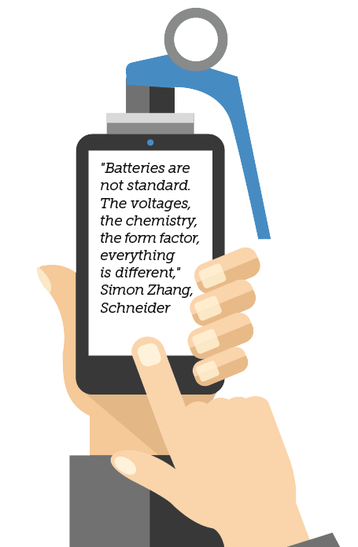 A choice of batteries

There is a debate in the industry over which type of Li-ion battery is best for which scenario, but Zhang is hopeful that the sector will organize itself: “Let the free market help us to filter through and consolidate to two or three vendors.”

But if you do trust your vendor and the solution that they offer, it is clear that Li-ion does bring some genuine benefits to the data center. “The general rule of thumb is that we save two thirds of the footprint and weight,” Zhang said.

The battery lasts longer, too, on average chugging along for 10-15 years, rather than three to six years for lead acid systems. “Another good thing is that it doesn’t collapse like lead acid. With lead acid, towards the end of life, you can get some sudden failures,” Stevenson said. “With Li-ion you get a gradual deterioration that can be measured quite simply.”

Li-ion can also bring cost savings as it can run efficiently at higher temperatures. While VRLAs perform optimally at 20 degrees, Li-ion can operate in temperatures closer to that of an average ambient environment.

“So you’ve got big savings on HVAC systems,” Stevenson said.

Savings are important, with discussions on which equipment to purchase for a data center invariably coming down to cost in the end.

Li-ion remains noticeably more expensive than lead acid, but has made significant strides towards reducing the price difference in recent years due to the rise of the electric car. Stevenson said: “That’s what’s allowed us to build the big plants to produce Li-ion.”

He was, however, cautious not to over-promise future price gains: “If you look at the basic costs of the raw materials in Li-ion, they are much more expensive than lead acid - you’re never going to get to parity, no matter how clever you are. Copper, cobalt, manganese, nickel and aluminum are all things which are more expensive than lead for unit amount of energy stored.”

But people should not look at just the ticket price of the battery, both Stevenson and Zhang agreed. Data center operators should look at the long term savings that a Li-ion battery can offer. Unfortunately, as of yet, few make this comparison.

“You can make a lower Total Cost of Ownership (TCO) case, but they still buy on capex, or up-front cost,” Zhang said. “If it’s two times the cost, it’s hard to justify, because normally the buyer is different from the people who run the facility.”

Stevenson said that “some of the telecoms companies have actually put their money where their mouth is and looked at 15 year whole life costs, but very few people are willing to look more than four or five years. They want the payback in that time.”

Time is what will prove the true arbiter on whether Li-ion will manage to make a mark in the data center, as operators wait to see how the market unfolds, each hoping for someone else to take the plunge and test out Li-ion at a large scale. If that happens successfully without facing any dramatic issues, it could pave the way for much wider adoption.

“We’ve been trying to get the message across, but so far I don’t think it’s been swallowed,” Stevenson said. “It needs one or two of these data centers to go big time, and people will understand it and see the benefits.”

“It’s on a cusp,” he continued. “We could be on that cusp for many years, or it could change very quickly. It really depends on if people can be convinced.”

Zhang said: “Education is the first thing we need to do. We see some early adopters, we’ve got a few. If they install them, that will help convince later adopters that this is a safe technology to use.” He added optimistically: “We feel like we’re at the turning point of switching to this new technology.”

But for those hoping for a rapid transition of power storage, Stevenson offered a sobering anecdote.

His company had recently been chosen to supply Li-ion batteries for the International Space Station - a hugely valuable contract - but getting the world’s space agencies to feel comfortable putting a device sometimes associated with explosions on man’s single most expensive construction in history was no easy task.

“We’ve been putting Li-ion into space for 20 years, but they certainly didn’t put them in the manned space stations until just recently,” he said. “It’s taken that long for people to change for manned space flight, and you work up to it through less critical situations first.

“You can’t force things, you have to wait for people to make up their mind.”

A version of this article appeared in the February/March issue of DCD magazine.

For more on the difference between Li-ion batteries and VRLAs, be sure to check out our on-demand webinar with Vertiv, available now.