Exploring the next epoch of data storage

What will remain of the human race?

In the latest issue of the DCD Magazine, we head to Svalbard to visit what could be the last data center, buried in the permafrost.

We also talk to Microsoft researchers planning halls of glass that last 10,000 years, delve into DNA storage, discuss the loss of knowledge with Internet Hall of Famers Vint Cerf and Brewster Kahle, and talk about immortality with the man behind the Voyager's Golden Record. 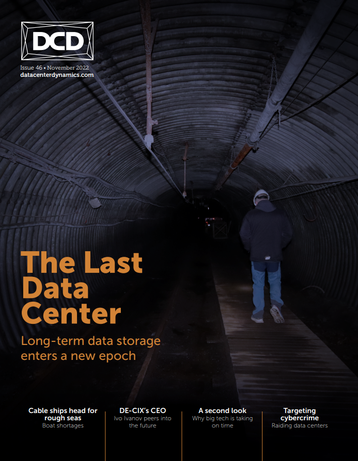 Peering into the future

Elsewhere in the magazine, we speak to DE-CIX's new CEO Ivo Ivanov about building an interconnection giant that spans the world.

Everyone wants submarine cables. Nobody wants to buy the ships that lay them

Simulating the cosmos takes a lot of RAM

When law enforcement comes for data centers, what happens?

Why telcos are switching off 2G and 3G, and what it means for 5G

Getting ready for the economic downturn

We’re already working on the next issue, but are always eager to hear your views, tips, and suggestions for the magazine at editorial@datacenterdynamics.com