We look at Microsoft, NREL and Daimler’s approaches to fuel cells in the data center

When deciding on a location for a data center, ensuring that the site has a reliable connection to the electric grid is normally one of the first things any company has to think about.

Microsoft believes it might have found another way. For the past five years, the company has been experimenting with a different approach - hydrogen or methane gas-powered fuel cells at the rack level. This offers advantages in terms of location, reliability and energy efficiency, but brings with it a whole new set of challenges.

After trials at Wyoming’s Dry Creek Water Reclamation Facility and the National Fuel Cell Research Center at the University of California Irvine, last year saw Microsoft take its biggest step yet towards commercializing this idea. 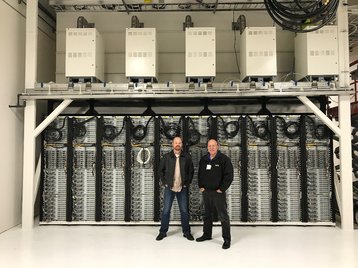 In September, the company teamed up with McKinstry and Cummins to launch what it called “the world’s first gas data center,” the design of which went on to win the DCD Mission Critical Innovation Award, presented at the end of 2017.

“What makes this project so disruptive is how radically it simplifies the process of powering servers and how this could almost double the energy efficiency of data centers - all while reducing costs and improving reliability.”

The project design, known as ‘The Stark and Simple Data Center,’ puts fuel cells at the server rack level. A fuel cell is composed of an anode, a cathode and an electrolyte layer between them.

In the case of hydrogen-fueled proton-exchange membrane fuel cells (PEMFCs), hydrogen molecules split at the anode into protons and electrons, activated by a catalyst. The protons can pass through the membrane while the electrons cannot, causing them to travel across an external circuit, therefore producing energy.

Different fuel cells use different electrolytes and charge-transferring ions, but the two with the most promise for the data center appear to be PEMFCs and solid oxide fuel cells (SOFCs), with the latter using natural gas (methane) directly.

SOFCs have a higher efficiency, larger capacity, and are suitable for continuous power generation, but run at a higher temperature, produce carbon dioxide, and are less responsive to variable load.

PEMFCs remain the cleanest fuel cell variant, producing only waste water, but hydrogen distribution and storage has yet to scale. That could change in the future, however (see Dawn of the hydrogen era below).

SOFCs present a quick and viable alternative to the electric grid and can still provide some environmental advantages over combustion - Microsoft estimates carbon dioxide emissions could be reduced by up to 49 percent, nitrogen oxide by 91 percent, carbon monoxide by 68 percent and volatile organic compounds by 93 percent.

Microsoft is experimenting with both approaches - in the paper Fuel Cell Powered Data Centers: In Rack DC Generation, the company explained that it has run tests using both a Hydrogenics HyPM 10kW PEMFC and a SolidPower Engen 2500 2.5kW SOFC.

The Hydrogenics system is designed with data centers and telecoms facilities in mind, whereas similar products do not exist with SOFCs just yet. The SolidPower system targets the residential and commercial buildings sector, and was designed for the co-generation of heat and power.

The paper states: “It is expected that SOFC systems designed for the in-rack power generation in data centers will produce more electricity and less heat and that such will be cooled with excess air and air ventilation systems already present in the data center.”

Key to the method’s energy efficiency improvement is the decrease in transmission losses. Energy is lost as it travels down the wire and, in a standard data center, these losses are found in the power plant, transmission, substation, transformation, and AC to DC conversion at the server.

With fuel cells spread across the server racks, a method known as a Distributed Fuel Cell (DFC), the loss is limited just to the power conversion in the cell itself.

In a research paper, Fuel Cells for Data Centers: Power Generation Inches From the Server, Microsoft found that when using its gas fuel cell approach, as much as 29.5 percent of generated power was spent at the server, assuming that the cooling load is proportional to the electric load for both traditional and fuel cell powered data centers. Further gains may be made if one could reuse the fuel cell waste heat for cooling processes.

Efficiency is not the only thing that makes a gas-powered data center attractive. Reliability could also be a major draw, with gas grid infrastructure usually buried underground and safe from severe weather. Gas grid reliability in the US is more than 99.999 percent, compared to the electric grid’s 99.9 percent or less.

This means that data center operators can consider eliminating diesel generators and batteries used for power backup, as well as getting rid of the power distribution system in the data center, which can account for over a quarter of the capital cost of a data center.

Challenges remain, however, with the technology still in the research stages. Of course, whilst operators no longer have to worry about a reliable connection to the electric grid, such concerns are replaced by a need to locate near a robust gas supply, if the SOFC approach is taken.

But perhaps the biggest issue is that of rapidly varying loads. Servers can drastically change their energy requirements at a moment’s notice, which the electric grid can easily accommodate.

But, with fuel cells, there is “a period of time where the fuel cells deliver an insufficient amount of voltage or power, resulting in server damage or shut down, which may lead to data center unavailability,” Microsoft explained in the research paper SizeCap: Efficiently Handling Power Surges in Fuel Cell Powered Data Centers. “We call this phenomenon a power shortfall.”

There are two approaches to dealing with such shortfalls. One is to perform power capping, which throttles server execution, therefore limiting server performance and causing both the fuel cells and data center to be underutilized. The other approach is to use energy storage devices (ESDs) like batteries and supercapacitors to cover the shortfall during load surges.

Provisioning for the worst-case scenario comes at a high financial cost, however. With this in mind, Microsoft has proposed SizeCap, which “coordinates ESD sizing with power capping to enable a cost-effective solution to power shortfalls in data centers.” The hope is to find a middle ground between the two approaches.

Further work on SizeCap and the matter of fuel cells as a whole is necessary, and the cost of the cells remains prohibitively high. Microsoft is hopeful, however, that the method will soon see more widespread adoption. If that happens, concerns over data centers’ impact on the electric grid may become a thing of the past.

Dawn of the hydrogen era 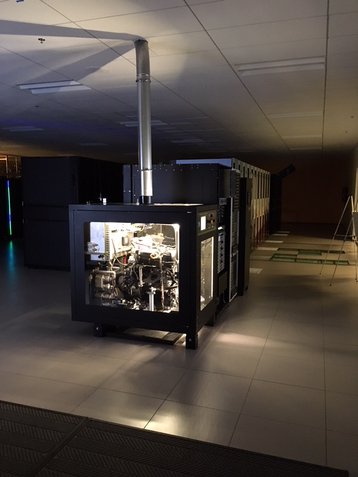 While proponents of solid oxide fuel cells (SOFCs) will point to the vast network of existing gas infrastructure that spans the globe as one of its greatest benefits, there are those that are adamant the future lies in hydrogen-powered proton-exchange membrane fuel cells (PEMFCs).

“I actually see SOFCs as more of a niche market, and it’s fairly expensive,” Dr Steve Hammond, director of the Computational Science Center at the US Department of Energy’s National Renewable Energy Laboratory (NREL), told DCD.

“They are best suited for baseload power and variable load or load following is not their strength.”

PEMFCs, meanwhile, have experienced significant advances “in terms of the efficiency and cost which is being driven by the automotive industry,” Hammond said. “I think we can leverage that for consideration in the data center space.”

While a separate battle rages between hydrogen and lithium-ion battery powered cars, manufacturers have invested heavily in the technology, helping bring the price of fuel cells down considerably.

Already, automotive firms are taking steps to use this technology for the data center. Late last year, Daimler revealed it had partnered with Hewlett Packard Enterprise (HPE), as well as Mercedes-Benz and NREL, to develop prototype continuous power solutions and stationary power systems that rely on hydrogen.

“The maturity of automotive fuel cell systems is unquestioned today. They are ready for everyday use and constitute a viable option for the transportation sector,” Prof. Dr Christian Mohrdieck, fuel cell director at Daimler AG and CEO of Daimler subsidiary NuCellSys, said at the time.

“However, the opportunities for hydrogen beyond the mobility sector - energy, industrial and residential sectors - are versatile and require the development of new strategies. Economies of scale and therefore modularization are important challenges.”

NREL has been testing a prototype of Daimler’s system since November 2017, installing it at its Energy Systems Integration Facility (ESIF) data center. Purported to be one of the most efficient sites in the world, it had an annualized average power usage effectiveness (PUE) rating of 1.04 in 2016.

“It’s still in the basic research phase, we’re focused on ‘can we do it safely, can we do it at all, does it make sense, is there a path to economic viability and where is further R&D required?’,” Hammond said.

“We’ve had a prototype, I believe Daimler plans to provide us one of their actual production versions that we’ll be able to operate by mid-year.”

“I think if it’s going to have an impact on the cloud space, it’s got to be done at row-scale integration. We have worked with Microsoft and gone through some techno-economic analysis of what a 50MW data center would look like if it were off-grid. They want 100 hours of backup. We went through the analysis at two different locations in the US, and how much wind and solar would be needed to support, and how you might store five gigawatt hour equivalents of hydrogen,” he added.

“They’re interested and they’re looking, and at some point it will make economic sense, it’s not immediate.”

Economic sense is not the only reason for cloud companies to be attracted to hydrogen fuel cells - there’s also the possibility of significant emission reductions. The extent of these reductions depends, however, on how the hydrogen is harvested.

The production of hydrogen always requires more energy to be put in than can be retrieved from the gas, in a process that relies on fossil fuels - some 95 percent of all hydrogen fuel is created using natural gas.

To be truly green, the hydrogen must be produced with electrolysis, where electricity is run through water to separate the hydrogen and oxygen atoms - and that electricity must come from renewable sources.

“For us to demonstrate that we can do this at all, we have solar on campus,” Hammond said.

“Through purchase power agreements, that feeds our electrolyzers, and we have existing hydrogen storage infrastructure. So we wanted to show that it was possible at all and possible to do safely, with appropriate safety mechanisms and failure mechanisms to show that - my biggest fear is that I didn’t want to be that other hydrogen incident people refer to.”

The Hindenburg disaster that killed 36 people in a devastating inferno in 1937 did not just mark the end of the airship era, it also taught an entire generation to distrust hydrogen. “People ask about the volatility of hydrogen, but they’re perfectly comfortable driving around in an automobile with 20 gallons of gasoline,” Hammond said.

“At NREL we’ve worked a lot on hydrogen sensors and technology for fueling stations. We work with hydrogen all the time, perfectly safely.”

But, for data center technicians to end up doing the same will still require many more years of research from those interested in radically rethinking the architecture of a data center, and how power is produced and stored.

For the past three years, Hammond has been working on the concept without direct funding. “I see this as impacting the market in five to ten years,” he said.

This article appeared in the DCD magazine. Subscribe for free today: