Global Switch has opened a 30MVA data center in the northern part of Singapore, in partnership with China Telecom Global and Daily-Tech. This is the colocation provider’s second data center in Singapore, and 12th around the world.

The Singapore Woodlands data center facility cost S$280 million (US$205M) to build and, like all data centers in Singapore, is a multi-story development. It has seven levels including the rooftop level, and contains 25,000 sq m (270,000 sq ft) of white space on five floors. Built on a greenfield site at 7 Woodlands Heights, it is hooked up to separate redundant feeds from two power substations. 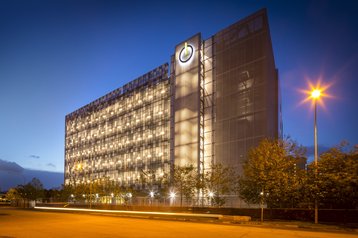 This is crucial to the new data center's success, since Tai Seng is an established connectivity hub which carries a “large proportion” of Singapore’s Internet traffic, and hosts points of presence (PoPs) for telecommunication providers, cloud players and even Global Switch's competitors.

The Singapore Woodlands facility will be one of the most energy efficient, resilient and secure data centers in the region, Corcoran promised. Its design PUE (power usage effectiveness) of 1.34 will make it the most energy-efficient multi-tenant data center in Singapore, and Global Switch is seeking a Platinum BCA Green Mark and LEED (Leadership in Energy and Environmental Design) Gold rating, he said. It will also offer employ 25 full-time staff.

The site complies with guidelines from the Monetary Authority of Singapore (MAS) for financial institutions, which are being adopted elsewhere in the region, including at the Iskandar Puteri Core Data Centre (IPDC) in Johor, Malaysia.

To comply with the physical aspects of these guidelines (“MAS TVRA”), it has anti-ram perimeter fencing, high-security crash barriers behind the delivery gates, and intrusion detection systems along the length of its perimeter fences. Backup power generators are also safely ensconced on the rooftop – instead of in a separate stack like older data centers in Singapore.

The building has 18 containerized DRUPS (diesel rotary uninterruptible power supply devices) on its roof, to give N+2 power redundancy for IT, and N+1 for mechanical loads. Storage tanks hold 200,000 liters of diesel to ensure a minimum of 24 hours of operation should the power grid ever fail. 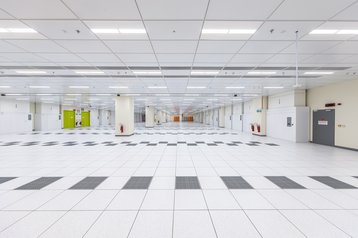 The data center halls have a minimum of 3.5m of usable space between raised floor and ceiling boards, which allows it to accommodate even 58U server racks. Within the building, there are diverse fiber paths to the two meet-me rooms (MMR).

Amidst these top-notch specifications, one curious fact stands out: the building has only one cargo lift – albeit a heavy-duty 5 tonne unit.

Global Switch has a rationale for this decision. The lift will only be needed for computing equipment, as the building has been “fully built-up from day one", instead of being built in multiple phases, Sam Lee, the Singapore managing director at Global Switch told DCD on a tour of the facility.

The Singapore Woodlands data center is the first project in the island state to adopt prefabricated mechanical, electrical and plumbing (MEP) modular techniques on a large scale, Lee told us. Built by Gammon Construction, the majority (60 percent) of the MEP works were assembled off-site, offering significant benefits to productivity, safety and quality, Lee said.

The building was modelled in 3D using Design for Manufacture and Assembly (DfMA) techniques so every square inch of the facility will be efficiently used, with all equipment placed with a high level of precision.

The inside of the building felt more like a cruise ship than the inside of a building, with chillers in the plant room installed in close proximity and tightly spaced pipes and overhead trunkings running above the corridors. 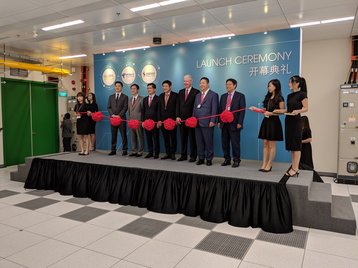 Global Switch Woodlands has faced more than one delay since planning permission was granted back in 2011. In 2018, construction began, and the first launch target was the end of 2018. Now the place is open, and Lee is on the lookout for customers.

China Telecom Global (CTG) is already there, with its own lobby area in the facility as well as a standalone operations center on level two. It already has 400 racks and over 2,400 sq m (26,000 sq ft) of floor space. This will eventually be increased to 2,400 racks – and will probably happen sooner rather than later.

According to Donald Tan, the executive vice president of China Telecom Global, the plan calls for the upgrading of its Singapore office – set up in 2006, to its regional headquarters later this year. The management and operations of the nearly 20 countries in Asia Pacific region will henceforth be conducted from Singapore.