How long is a piece of string?

The European banking industry is undergoing a major shake-up: this month, the Markets in Financial Instruments Directive II (MiFID II) became law, causing misery among algorithmic traders, investment bankers, hedge fund managers and anyone else employed to grow and multiply money. It also affects colocation facilities and trading exchanges that serve more than one financial organization.

MiFID II includes the requirement to provide customers with “equal conditions” in terms of data center resources like power, cooling and networking. Power and cooling are easy but networking is not, since latency depends on the length of the cable used to transfer data.

This means a server located closer to the router - and thus having a shorter fiber cable - would have a minuscule yet measurable speed advantage over a server that is located further away. This might not have much of an impact on traditional data center workloads, but it could mean a difference between profits and losses in high-frequency trading. 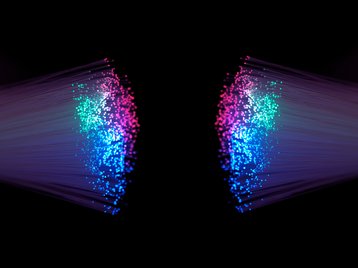 “A decade or so ago, a lot of these businesses located right inside big trading exchanges, as opposed to enterprise data centers, because the biggest contributor to latency is distance. For every meter of distance you get about five nanoseconds [0.000000001s] of latency,” Stephen Morris, senior product manager for Panduit’s data center connectivity solutions, told DCD.

“What’s happened under this EU law is the focus has shifted from latency to the distance between where the equipment is located and where the transaction is taking place. If Customer A is 100 meters further away from the exchange equipment than Customer B, someone is going to have an unfair trading advantage. If it’s 40-50 meters, it’s going to be 250 nanoseconds.”

The main text of MiFID II is 196 pages long, and obviously, not all of it relates to cabling. The new rules were designed to restore investor confidence following the 2008 financial crisis, and to make European markets more transparent in order to avoid another banking-induced meltdown.

That’s where the requirement for equal conditions originates: the notion is that latency variations within a facility are not fair, and could even lead to shady deals between traders and infrastructure owners.

In general, data center operators go to great lengths to improve network performance for their customers, and that’s what makes this piece of legislation so unusual. “We normally talk about reducing latency, but in some cases [with MiFID II] we are actually increasing latency: think about it like a speed bump or a traffic light,” Morris explained.

“We can’t physically bring them down to the shorter [cable] length because of the space constraints in a data center. So what you have to do is actually take them all out to the maximum length. If the maximum length between all the customers is 100 meters, then the guy who’s on 20 meters now also needs a 100-meter fiber optic cable.”

Just the right amount of fiber

It sounds simple in theory, but there are several considerations to keep in mind. One is mechanical - you will actually need to stash away hundreds of meters of cable.

According to Morris, in preparation for MiFID II organizations have been hiding additional fiber all around their data centers: in cable trays, under the floor, and in the racks themselves - this is where structured cabling can be of great help. Another consideration is the precision of measurement - to ensure compliance, cables have to be pre-terminated and cut to very specific lengths.

“When you think about length of 170-180 meters, that’s twice the length of a football pitch, you can’t get that exactly right, there’s got to be a tolerance there which is normally about 10 percent. What we found with one particular customer is they were asking for precision that was unheard in the industry - around half a percent.

“So not only did we have to change our process internally, we also had to work with partners that install the product to test and verify on site, with equipment that’s not been used in the UK before.” Morris wouldn’t reveal the type of equipment used, but he did hint that it was borrowed from the world of telecommunications: “Very few people involved in installing data centers would know this stuff exists.”

New EU regulations like MiFID II and GDPR show that legislators are becoming increasingly aware of the role of data centers as the backbone of modern business, and how even minuscule changes on the digital infrastructure side can have far-reaching consequences. It’s safe to say we can expect this type of interference to increase in the future.