There's gold in them there clouds

Bitcoin mining seems like a good match for data centers. But is it a viable business model?

On the surface, mining for crypto-currencies seems like an ideal application for data centers. The technology requires lots of power and significant cooling, yet places little demand on expensive data center technologies such as high availability, replication and backup. A web search will find dozens of sites that are promoting cloud-based currency mining, but drilling down into the technology paints a confusing picture.

The best known, and most valuable of the crypto-currencies, bitcoin, has had its ups and downs, with a peak value of more than $1,000 crashing quickly to the $500 range and continuing a low decline to where it seems to have stabilized in the mid to high $200 range at the time of writing. And with such a volatile currency, it is unsurprising that companies set up to take advantage of bitcoin mining have been equally unstable.

The brief history of crypto-currency mining is filled with a litany of complaints to regulatory authorities, as everything from basic mining hardware to large-scale cloud mining entities have failed to live up to the claims made by the vendors. The fledgling crypto-currency sector has been plagued with hardware announcements that took pre-orders for products that never saw the light of day, and vendors declaring bankruptcy after losing tens of millions of dollars of investor and customer money.

Few things highlight the duality of the currency mining business better than events of January 2015. First, currency mining darling BitFury, fueled by additional venture capital investment in 2014, bought immersion-cooling company Allied Controls to help it build better, more efficient data centers focused on currency mining. And then well-known bitcoin mining company CoinTerra declared bankruptcy, having managed to hit almost all the highpoints of bitcoin failure, including late or non-delivery of hardware, failure to refund monies owed, and not paying its colocation data center bills. Having failed at almost every aspect of the currency mining business, it left the business with somewhere in the range of $10m to $50m in liabilities.

Even today, anyone looking into the state of crypto-currency mining will find a surprisingly large number of dead links and suspended web pages, even from reference websites that are actively updated. We decided to investigate two different approaches to currency mining: actual mining, with equipment bought from hardware vendors, and the use of third-party cloud-based mining services. The complexity involved in determining where consumers should spend their money is significant, and not for the faint of heart.

Crypto-currency mining started out as something that could be done with standard computing hardware, but it has evolved to the point where specialized systems using ASICs and large power supplies are the bare minimum for effective mining. These systems, even in small incarnations, take a lot of power and generate a lot of heat. This has led to an interesting data center incarnation – the currency mining colocation provider.

The nature of currency mining means that cheap power and cooling are the driving factors in selecting where their data centers are located, to the exclusion of almost every other traditional data center decision factor.

These facilities allow customers to send them as little as a single mining system to run in their dedicated hosting facility, giving the customer access to their systems and providing a location, power and cooling so the mining rigs can run in an optimal fashion. These colo facilities price their services based on how much power the customer plans to use, generally on a kilowatt per month basis, with the unit power price going down as the customer power commitment goes up.

Like cloud currency mining facilities, these colocation providers don’t necessarily look like what you’d expect a data center to be. As these facilities want to support any customer-provided currency mining rig, traditional 19 in-racks may not be appropriate, and custom facility providers such as AsicSpace use simple industrial shelving in lieu of traditional server racks. Meanwhile, other colocation providers such as the bitcoin company SAIC Hosting have contracted with more traditional wholesale data center space providers. In SAIC’s case, it uses the Quincy, WA data center run by Dell. 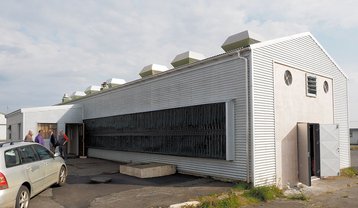 Cloud mining for crypto-currencies has definitely been a boon to the data center business. BitFury has opened multiple data centers in Iceland (as does Borealis, shown left) and the Republic of Georgia, where it has also invested sufficiently to create an entire technology park that is a boon to the local economy. Genesis Mining has a dedicated facility in Iceland, while other data centers have been built in areas as diverse as Estonia and China.

The nature of currency mining means that cheap power and cooling are the driving factors in selecting where their data centers are located, to the exclusion of almost every other traditional data center decision factor. With the price volatility of individual bitcoins, minimizing the cost of mining is critical for successful operation. Without driving the cost of mining down, currency mining becomes a crapshoot, with investors wagering that crypto-currency values will reach a point where their mining costs still make it profitable. Is that a lot of water? 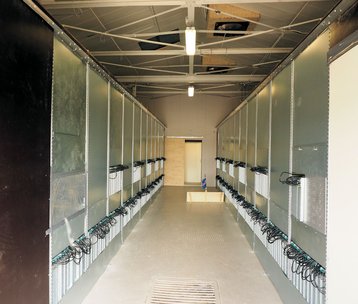 This list of colo and cloud providers (see box) is nowhere near complete, and there is no guarantee that any of these operations will still be in business by the time you read this. Many of the sites are hosted in small dedicated data centers in Eastern Europe, while others are using commercial wholesale data center space or traditional colocation providers to host their servers.

Before making any financial commitments to any of these providers, significant due diligence is required, whether as an investor, user, or potential data center host. Currency mining information site Coindesk is a good place to start for current information on what is happening in the crypto-currency business, while community forums such as www.reddit.com/r/bitcoin provide a great deal of feedback about individual vendors and current happenings in the crypto-currency world.

This article appeared in the November 2015 issue of DatacenterDynamics magazine

Colocation facilities for mining rigs include: