Britannia ruled by the waves

Every five years, the UK government’s Department for Environment, Food and Rural Affairs (DEFRA) publishes a report on the expected impact of anthropogenic climate change. 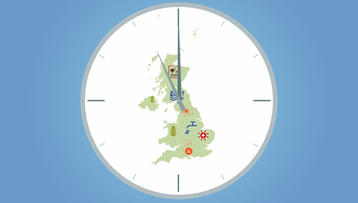 The report, commissioned by DEFRA, was put together by the independent statutory body the Committee on Climate Change (CCC), which interviewed several hundred scientists, as well as experts in the private sector.

It is worth noting that most of the content was created prior to the election of Donald Trump as President of the United States, and the estimates on warming levels assume that the Paris Agreement remains in force, something that is likely to change under Trump.

In the infrastructure segment of the report, CCC lists twelve of the UK’s biggest infrastructure assets, including major airports, ports, roads and, crucially, data centers.

Citing 2014 DCD figures, it notes that there are 3.5-3.6 million sq m (38.8m sq ft) of data center space in the country, supporting 23.7 million broadband connections, all of which will have to take climate change into account.

However, the report later states that “there is limited information on the location of UK ICT infrastructure, making it difficult to make a rigorous and quantitative assessment of risks to ICT networks and services.

“The ownership of a large proportion of ICT infrastructure, particularly data centres, is spread across the private sector. Information on location and connectivity is not publicly available, for commercial or security reasons, and so it is difficult to assess vulnerability to extreme events.” 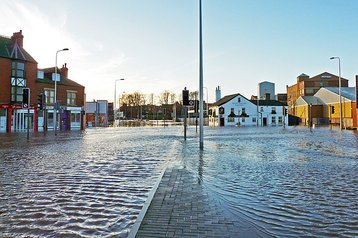 “Climate-related risks have the potential to disrupt the availability and reliability of the ICT sector and consequently push up operational costs for users,” the paper’s authors write.

“Projected changes in climate may increase the risk of damage to ICT infrastructure in a number of ways.”

“For example, the winter 2015/16 floods in the north-east of England inundated a number of key ICT assets in Leeds and York. This led to loss of communications for thousands.”

The report states that network diversity and redundancy will mean that some regions will be able to compensate for partial system failures.

“The exception is at the edges of networks where diversity is at its least – typically near low population regions, or remote locations such as islands where loss of ICT for communication or control of other systems can cause the greatest problems.”

UK floods have previously taken out BT and Vodafone data centers, while elsewhere floods have knocked out T-Mobile and Optus.

Looking more broadly, CCC states that “flooding is the most significant climate change risk to UK infrastructure,” affecting all sectors.

“Flood risk from all sources is projected to increase across the UK, and even the most ambitious adaptation plans by national and local authorities will be unable to prevent flood risk rising in some parts of the country.” 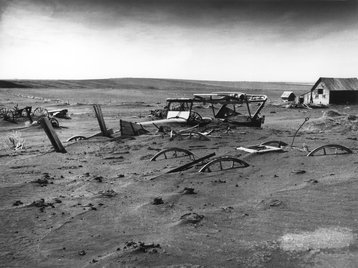 Just as flooding presents a risk to data centers, particularly those near the coast, more intense or longer droughts and heatwaves “can affect a range of ICT infrastructure because ground shrinkage can lead to failure of electrical, gas and water pipes, thereby damaging cosited ICT infrastructure.”

While pipe damage could likely impact co-sited infrastructure, the cables themselves “are designed to operate in global extremes of temperature,” and would be unaffected by expected temperature changes.

Heatwaves and droughts, which would be “further aggravated in cities by the urban heat island effect,” have another downside - they “place additional demands for cooling on energy networks increasing the risk of ‘brown out’ due to a reduction or restriction in power.”

“High summer temperatures, as well as rapid fluctuations in temperature and humidity, pose challenges particularly to data centres, which need to be kept cool to operate.”

While businesses adapt to deal with these higher ambient temperatures, they will find another obstacle to adequate cooling - the lack of clean water.

The infrastructure report notes that UK freshwater supplies are already strained and will dwindle further, while the ‘Natural Environment and Natural Assets‘ report adds that “depending on the rate of sea-level rise, existing freshwater aquifers may be at an increased risk of saline intrusion.”

The report also highlights the impact this will have on power stations, since water temperature and salinity level increases can reduce the thermal efficiency of power plants.

“Disruptions to coastal thermal plant using sea water as a coolant have been reported due to water intake systems becoming clogged with seaweed and jellyfish.”

Even without taking climate change into account, the largest concentration of electricity generation capacity in the UK, off the coast of the River Trent, is on track to hit the upper limit of water abstraction for all sectors by 2040 - just for its cooling needs.

With all this in mind, and looking at the country as a whole, a scenario in which the energy mix consists of high nuclear or carbon capture technologies “could require as much as six times the current cooling water demands.” 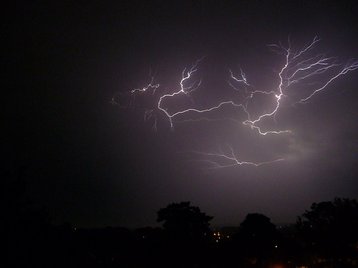 The report continues: “Storms – wind and lightning – are the biggest risk for disruption to overhead cables which are vulnerable to tree- and debris-related damage, particularly for energy distribution infrastructure, but also to some Information and Communications Technology (ICT) networks such as those delivering broadband to rural areas.

“Changes to wind climate are uncertain, but lightning strike disruptions to the energy network may increase by up to 36% by the 2080s based on the A1B SRES climate scenarios with a similar increase in the incidence of damage to mobile base stations.”

Thankfully, the impact of such events is relatively low when compared to events such as flooding, as damage can usually be repaired quickly, it notes.

While the report does not go into detail on the subject, lightning has been responsible for many a data center outage, notably bringing the Singapore Exchange offline, deleting data at Google and taking out Fujitsu’s operations in Perth.

The report is to be presented the the UK Parliament ahead of next year’s UK National Adaptation Programme, and comes with numerous suggestions on how to prepare for the inevitable and prevent the worst.

In the section on ‘Business and Industry,’ the authors also turn to the private sector as an area that needs to improve: “Sustained action is required to create more flexible water abstraction systems and promote water efficiency among businesses.”

When it comes to floods, “the incentive for governments to prevent flood damage to individual businesses is also limited… where national funding is insufficient to meet the full costs of a scheme, businesses can contribute towards the shortfall as part of the Flood and Coastal Resilience Partnership Funding policy.”

The report adds that the Business Resilience Health Check tool, which helps businesses identify if they are at risk of flooding, has been accessed by 2,000 organizations to date.

But, should all this fail, it is ICT that will prove the savior of the UK economy, the authors hope: “Resilient ICT and electricity supplies are critical for effective management responses to extreme weather events, particularly remote working… Many homeworkers depend on ICT infrastructure to allow them to work remotely.”

In the end, as the waters rise, it is data centers that will keep Britain afloat.