Vertiv makes a pitch for the Edge

This week, critical infrastructure company Vertiv declared its intentions to become a leader in edge computing, at its European Innovation Summit in Zagreb, Croatia. The event included an explanation of edge applications, and showed micro data centers designed for installation at cell tower sites.

Edge computing has been treated as a generic term for IT resources which have to be located close to the sources of data, or customers. However, the term covers four distinct kinds of edge, or “edge archetypes,” according to a presentation by Alex Pope, director of product management for global solutions at Vertiv. 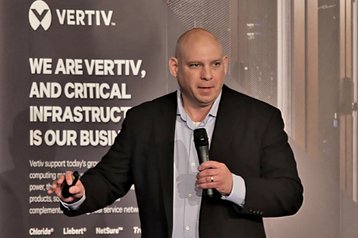 Launching Vertiv’s ’Ready for Edge’ brand, Pope said the company will be delivering “edge-focused integrated products,” adding that they must meet a set of diverse needs: ”Edge will serve different purposes.”

There will also be a kind of division of labor: “analytics will be at the edge, and HPC in the cloud.” The four edge archetypes, described in a Vertiv White Paper, are as follows:

The message has actually existed in some form or other since Vertiv was spun off from Emerson Network Power just over a year ago.

Outside Zagreb’s Westiun Hotel, Pope showed a small containerized system designed to be deployed at cell towers, explaining that such a system must be made and shipped by a company with the ability to deliver globally, and to customize its products. Asked by DCD about the business model which would pay to install such systems, he said: “We aren’t trying to predict the outcome, but we believe that colo will play a role.”

Essentially, cell-tower micro-facilities will make up a distributed colocation facility, and companies like Netflix and Amazon will be the anchor tenants, with pre-configured hardware units ready to install in the containers, as soon as the industry works out who will build and pay for them.

Important features at the cell tower will include remote management and diagnostics, as there will be no on-site IT support, and effective fire suppression units, Pope said: ”Compared to other suppliers, we believe our manufacturing techniques are more efficient and we have significant differentiation in our ability to deploy rapidly.”

Typical cell tower units will have 10kW to 100kW capacity, and could include DC power distribution, as this is already used in the telco space.

Vertiv’s competitors in offering edge capacity for cell towers include Schneider Electric, along with other companies offering products based on Schneider modules - such as EdgeMicro - Vapor IO. 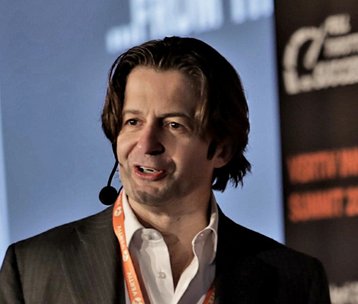 Also at the Summit, Giordano Albertazzi, president for Vertiv in Europe, Middle East and Africa, said the spin-off from Emerson was “exhilarating,” as it allows the company to focus on specific markets and respond quickly, with faster decision making.

Andrew Donoghue, director of analyst relations EMEA at Vertiv, said that digital disruption was more nuanced than most reports have suggested: “Digital Disruption may overturn the dynamics of a traditional market,” he said, citing sectors such as music, but “digital transformation is the use of technology to compete.”

Update: this article previously described DartPoints as one of the companies selling Schneider modules. In fact, DartPoints is vendor agnostic, and ”enjoys relationships with all manufacturers, not least of which is Vertiv itself,” according to Loren Long, chief strategy officer at DartPoints. We regret the error,