China is set to launch the first ever quantum communications satellite this July in an experiment which could potentially lead to an unbreakable encrypted wireless network. In addition, later this year the nation hopes to complete an $80 million, 2,000km quantum communications link that will connect government offices in Beijing to those in Shanghai.

Leading the quantum projects is Professor Pan Jianwei, from the University of Science and Technology of China, who in 2009 successfully implemented quantum communications technology for exchanging information among government officials during a military parade. Pan told Caixin: “China is completely capable of making full use of quantum communications in a regional war. The direction of development in the future calls for using relay satellites to realize quantum communications and control that covers the entire army.”

The network and satellite are expected to transmit encoded data through quantum key distribution (QKD), where cryptographic keys are transmitted via light-pulse signals. The transfer of data remains secure due to the phenomenon of quantum entanglement - when entangled, particles can share the same quantum state irrespective of their spacial distance from each other, but the entanglement collapses when it is observed.

This means that eavesdroppers would theoretically be unable to monitor the data without immediately changing the quantum state and being noticed.

Having such information security is of obvious interest to China, a country that fears the possibility of hacks or leaks: “The Edward Snowden case has told us that the information in the transmission networks are exposed to risks of being monitored and being attacked by hackers,” said Pan.

Weighing in at 500kg, the experimental satellite contains a quantum key communicator, quantum entanglement emitter, entanglement source, processing unit and a laser communicator. It will orbit at an altitude of 1,000km and is expected to live two years.

Quantum physics researcher Anton Zeilinger, of the University of Vienna, had hoped for the European Space Agency to develop its own satellite but found the organization too slow. “Its mechanisms are so slow that no decision was made,” he told Nature in 2012.

Instead, Zeilinger, who was previously Pan’s PhD adviser, collaborated with the Chinese. In 2013, Austria and China announced the Quantum Experiments on Space Scale collaboration, with a ground station for the Chinese satellite being built in Vienna.

Looking further into the future, China’s official press agency Xinhua has said that the country hopes to “achieve Asia-Europe intercontinental quantum key distribution in 2020 and build a global quantum communication network in 2030.”

Pan also said that he wants “to see if it is possible to distribute entanglement between Earth and the Moon. We hope to use the Chang’e programme [China’s Moon programme] to send a quantum satellite to one of the gravitationally-stable points [Lagrangian points] in the Earth-Moon system.”

At the same time, the Chinese government has been cooperating with local private tech companies, including Alibaba and ZTE. In 2015, Alibaba CEO Jack Ma signed a memorandum of understanding to co-found the Chinese Academy of Sciences Alibaba Quantum Computing Laboratory, with Professor Pan saying that the “laboratory will undertake frontier research on systems that appear the most promising in realizing the practical applications of quantum computing.

“The laboratory will combine the technical advantages of AliYun in classical calculation algorithms, structures and cloud computing with those of CAS in quantum computing, quantum analog computing and quantum artificial intelligence, so as to break the bottlenecks of Moore’s Law and classical computing.”

Outside of China, Canada’s Federal Economic Development Agency has funded a feasibility study on a proposed quantum key distribution microsatellite developed by the Institute for Quantum Computing and the University of Toronto’s Space Flight Laboratory. 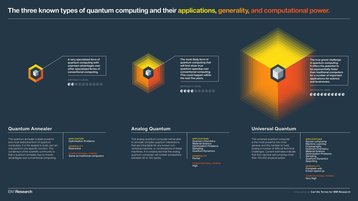 In addition to quantum communications, investment is pouring into the closely related field of quantum computing - where, rather than having to be a binary 1 or 0 position, quantum bits (qubits) are in what is called a ’superposition’, and can be both at the same time. This potentially allows for significantly more powerful computers which can take advantage of the vastly greater number of possible states.

Commercially, Canadian company D-Wave is one of the leaders in the field, having created several computers that incorporate quantum mechanics. The D-Wave 2X has over 1,000 qubits, which means its quantum processor can potentially evaluate 21000 possible solutions simultaneously, according to the company, but there is dispute as to how close the system is to a true quantum computer.

Google, which shares a D-Wave computer with NASA, also has its own quantum computer research department, led by Professor John Martinis. Meanwhile IBM, which kicked off a multibillion dollar initiative in this field in 2014, announced earlier this month that they would allow developers to access its experimental quantum processor, the ’IBM Quantum Experience’, on IBM Cloud.

The company said: “We are at the beginning of a new chapter in the information revolution. Up until now, this revolution has unfolded based almost entirely on what a physicist would call a classical model of information. This is now known to be too narrow. Breaking out into a fully quantum theory and technology of information processing will enable us to perform some computations that would take more than the age of the universe to do on a classical computer; and to process information in other ways that are so new and different that they cannot even be properly described, let alone performed, within the classical model.”

Nations have also rushed to gain ground in the quantum space. Not only is In-Q-Tel, the CIA’s venture capital arm, a D-Wave investor, but NASA has its own Quantum Artificial Intelligence Laboratory (D-Wave, NASA and Google are all collaborating and competing with each other). Late last year, the US Intelligence Advanced Research Projects Activity (IARPA) awarded IBM “a major multi-year research grant to advance the building blocks for a universal quantum computer.”

The EU, while having been slow to attempt creation of a quantum communications satellite, is keen not to miss out on the potential quantum computing revolution. Earlier this month, Günther H. Oettinger, Commissioner for the Digital Economy and Society announced a €1 billion ($1.12bn) initiative on quantum technology “expected to be a large-scale initiative similar in size, timescale and ambition to the two ongoing [Future and Emerging Technologies] flagships, the Graphene flagship and the Human Brain Project.”