Battery charge: Why nickel-zinc batteries are challenging lead-acid and Lithium-ion

For decades, lead-acid batteries – first invented in 1859 by French physicist Gaston Planté – have been pretty much the only battery choice for data center UPS.

While energy density is low, compared to rival technologies, the ability to supply surge currents means that lead-acid nevertheless offers a respectable power-to-weight ratio and a high level of safety at a relatively low cost. 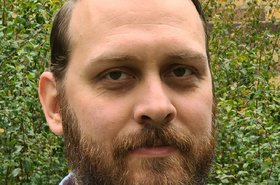 Conference Session Enhancing the future of energy storage: a solid case to embrace the next generation of battery technology

The main challenger technology is Lithium-ion. First popularised by the demands of small devices, like smartphones, the development of electric vehicles saw Lithium-ion technology quickly developed for much bigger and more power-hungry applications, making it suitable for consideration for data center applications.

As a highly energy-dense compound, Lithium-ion packs more voomf into a compact package than anything else on the market today, hence its popularity.

However, it’s arguable whether there is enough lithium in the world to satisfy the demands of the global automotive industry, let alone the UPS needs of data centers, or for industrial lubricants, metallurgy, pottery, the nuclear industry, even medicine, and goodness knows how many other uses for which lithium is also essential.

In addition, Lithium – as any school chemistry lesson will have taught – is not the most stable of compounds, and batteries based on Lithium-ion technology do not have an unblemished record: as some users of the Samsung Galaxy Note 7 can no doubt confirm.

And, should lithium-ion cells ignite, the carbon dioxide emitted is the least of your problems: The smoke will also consist of a combination of hydrogen, fluorine, carbon monoxide, and a number of hydrocarbons, while the hydrogen and fluorine emitted can react to produce hydrogen fluoride, which in turn can react with water in the air or in the lungs to create hydrofluoric acid.

And the failure of just one cell in a Lithium-ion battery can cause thermal runaway, a process in which all the cells in close proximity to the failed cell join in the meltdown.

That would be worrying enough if it’s an overheating smartphone, but in a data center UPS it could be altogether more damaging.

Therefore, while Lithium-ion powered UPSs in the data center are certainly highly alluring, given such features as energy density and cycle life that Lithium-ion technology offers, there is an even more suitable alternative, according to Aaron Schott, Senior Product Manager of Data Center Solutions at ZincFive.

In a presentation in DCD’s recent DCD>New York broadcast, now available to stream on-demand, Schott made the case for Nickel-Zinc as a more stable alternative offering more features more appropriate for data center UPS than either lead acid or Lithium-ion. 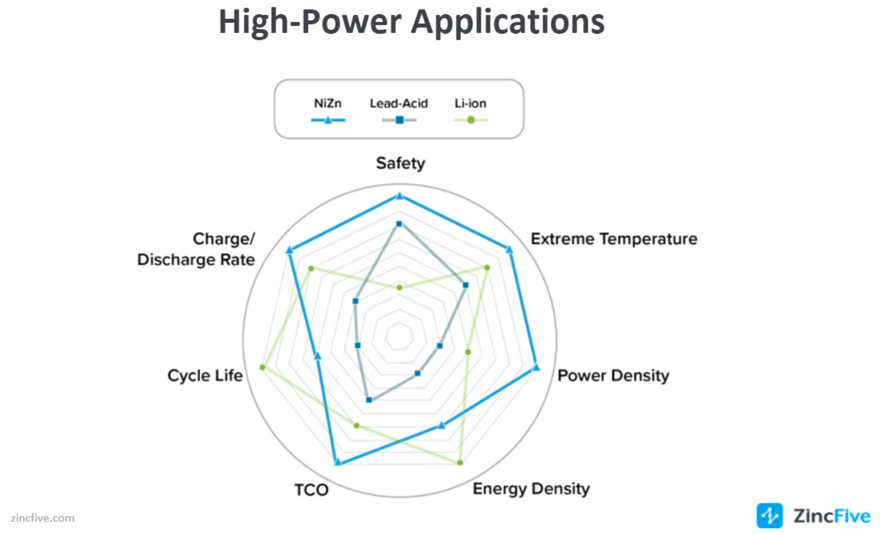 While the energy density of Nickel-Zinc is not as great as Lithium-ion, it offers significantly greater power density. Conventional lead-acid batteries, meanwhile, only really score highly in terms of safety and familiarity compared to both challenger technologies.

Nickel-zinc batteries are also highly flexible in terms of the temperatures they can withstand. “You have some power density and the ability to operate at high temperatures, and you can do that very safely,” said Schott. As a result, they even beat lead-acid batteries in terms of safety, resistance to extreme temperatures and, therefore, operational flexibility.

Nickel-zinc is also more cost-effective to install and manage than Lithium-ion, offering lower total cost of ownership With Li-ion, said Schott, “you have to ship the cabinet [and] install the battery separately, and that adds to the labour costs of the installation.”

Like lead-acid installations, he added, “there’s no restrictions on how you can ship them.”

Moreover, the way the three battery technologies age also differs, with both Li-ion and Nickel-Zinc outlasting lead-acid by a wide margin – ZincFive guarantees its batteries for ten years, adding that they ought to provide a 15-year operating life from new.

Missed the broadcast first time round? Want to find out more? Watch the presentation here. Missed DCD>New York? Stream every session on your PC, laptop or smartphone.