Anord Mardix is used to hyperscale projects. In fact, they are becoming one of the most frequent types of project the company works on as a business.

In recent years the company has had the privilege to work with a number of big brands, producing the products and services that enable its clients to grow within their own sectors.

But, in order to keep up with project deadlines, Anord Mardix has had to make significant investments to its production line – one of which, was installing a colossal crane at its WS1 (UK) manufacturing site, which was completed in 2021.

After a full 12 months of utilizing this key piece of equipment within its production process, Anord Mardix wanted to see how much impact the crane has really had on its production capabilities.

The basics of hyperscale production

For Anord Mardix, a key part of assembling its products for hyperscale projects is the ability to mount its LV and HV switchgear on power skids, which elevate the products off the floor and allow the switchgear to be air-conditioned underneath.

Being mounted upon a power skid gives these hyperscale products modularity. Anord Mardix’s modular designs, such as the modular power pods that can be seen here, allow the project brief to be fulfilled in stages: assembling, completing, testing and shipping each section as it’s ready. 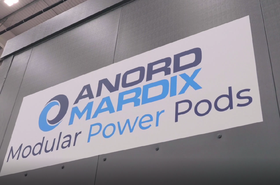 When the modular power pod arrives on site, engineers will connect it and test it for a final time. This process significantly reduces project lead times, making it much quicker than a full install ‘from-scratch’, onsite, at the project location.

Modular plantrooms ultimately provide the following benefits for a project:

Modular plantrooms would not be possible if it weren’t for the power skids at the base of each power pod.

A skid mounted solution is crucial to the assembly and shipping of Anord Mardix’s HV and LV switchgear on a hyperscale project.

But how are skids’s made?

Skids’s are fabricated from sections of structural grade steel, welded together. The dimensions of a fully fabricated skid average at around 5m width and 1m depth, although this can vary depending on project specification.

To date, since installing the crane in 2021, the company’s biggest fabricated skid has been 12m x 3.5m, weighing almost five tonnes.

The fabrication process has a total of four stages to complete one skid. The final stage will see the drilling and tapping of chequer plating, ready for use in the electrical fitting stage and beyond.

The new crane: Before and after

The newly installed crane has become instrumental to the fabrication process.

A single girder 15m span with a 7.4m lift height, this dual hoist crane has a total lift capacity of 10 tonnes. The crane girder is connected to A-frame leg fabrications which operate on floor rails of 47m in length, providing coverage across the complete skid manufacturing area at our WS1 site.

The crane is fitted with a pair of powered turnover units, allowing engineers to rotate the skid when required, which takes on average around 10 minutes to do.

The crane is operated by a remote Radio Control System, operating either hoist independently or in tandem, including sections of either turnover unit. When not in use, the turning units can be quickly disconnected from the crane via plugs and sockets mounted on the crane hook block and finally stored on independent stands.

The business and staff have already reaped substantial rewards from installing the new crane and the company is excited for this to continue in the future.

Before installing the crane 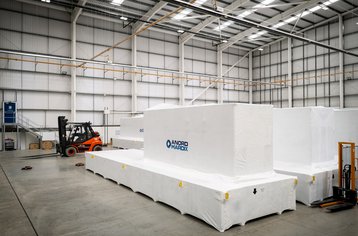 After the crane installation 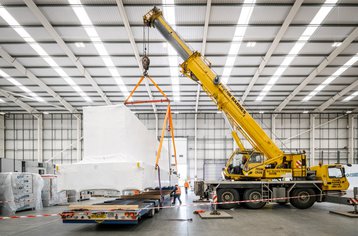 Moving away from a telehandler and replacing it with a crane which is big enough to flip the skids within 10 minutes, with minimal disruption to the welders, is a significant improvement to the production line.

With an overall saving of 12 hours per skid, the company can now comfortably produce four per week, enabling it to meet project demands and deadlines.

The crane also helps massively with the production of smaller skids, not just big ones. In August 2021 Anord Mardix managed to produce 20 skids across 6 days. And in January 2022 was able to weld, paint and transport a total of 12 skids over to Ireland within only three days - unthinkable when using a telehandler. It's clear to see just how much of an impact this crane has had to our business.

A year on from the installation, the company has successfully boosted production rates for this hyperscale product and made things much easier for the production team.

If you are interested in finding out more about Anord Mardix’s modular design products, check out this blog.