Apple declines to commit to Galway data center, Irish gov't promises to "do anything"

Plus, Ireland will overhaul how it approaches data center proposals

With the path now virtually clear for Apple to begin work on a €850 million ($1bn) data center in Athenry, County Galway, many had expected the project to proceed.

But after conversations with Apple CEO Tim Cook, Ireland’s state head, Taoiseach Leo Varadkar, said that the company failed to commit to the project.

He offered to do whatever he could to keep it alive. 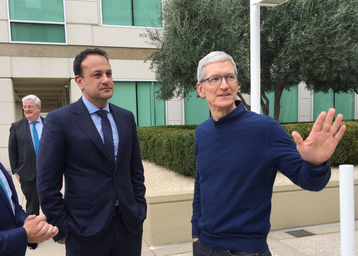 “We didn’t get a stuck date or a definite commitment or anything like that,” Varadkar said to broadcaster RTÉ during a visit to Silicon Valley.

“But certainly from our point of view we really impressed upon them very strongly how much the government is behind this project, how we will do anything that is within our power to facilitate it and how the people of Galway and Athenry in particular really want it to happen.”

The data center was originally announced in 2015, alongside a facility in Denmark, but faced objections from local residents, appeals, and a shortage of judges that held the project back. With the complaints against the data center rejected, and the appeal against that decision not allowed to go ahead, the construction process can finally begin - unless the objectors lodge a Supreme Court appeal.

However, a lot can change in two years. Apple’s Danish facility is set to open this year, and the company has already announced plans to build a second data center on the campus for $921 million.

With the Galway project held in limbo for so long, Ireland plans to change how it approaches future data center projects. RTÉ News reports that applications will be processed directly by the state-level An Bord Pleanála, rather than going through local authorities.

A government spokesperson added that the Cabinet is developing a detailed position on the role and importance of data centers, including on their designation as strategic infrastructure and on the requirement to be powered by renewable energy where possible. Such changes would not affect the potential Apple project.

Outside of the data center issue, Varadkar said that Cook “expressed nothing but significant commitment to Ireland,” where its European headquarters reside.

The world’s largest public company enjoyed a low tax rate in the country, but in August 2016 the European Commission (EC) ordered Apple to pay €13bn in back taxes after ruling that the country’s rate was so low that it amounted to state aid.

Ireland itself has appeared reluctant to collect the tax, with Ireland’s finance minister rejecting the findings this summer.

Last month, the EC ratcheted the stakes up another notch, declaring it will take Ireland to court to force it to collect the taxes. Dublin called the move “wholly unncessary,” adding that it had never accepted the commission’s analysis in the Apple ruling.

The government said in a statement: “It is extremely regrettable that the Commission has taken this action, especially in relation to a case with such a large scale recovery amount. Ireland has made significant progress on this complex issue and is close to the establishment of an escrow fund, in compliance with all relevant Irish constitutional and European Union law.

“The work on the establishment of the escrow fund to deal with the unprecedented recovery amount will continue, notwithstanding the fact that Commission has taken this wholly unnecessary step.”

It is not clear whether tax was part of the agenda during Varadkar’s discussion with Cook.