Atlantic.Net, a service provider offering SSD-based cloud facilities for developers has installed its first servers outside the US, in a cage at Infinity’s data center in Slough, UK.

Customers can launch cloud servers in less than 30 seconds at the data center close to London. Although it’s the first Atlantic.net hardware outside the US, it’s the company’s sixth location - and has been delayed somewhat while Atlantic adapts to a change in European tax laws. Services from the site will have SSD storage and 55Gbps infiniband networking technology. 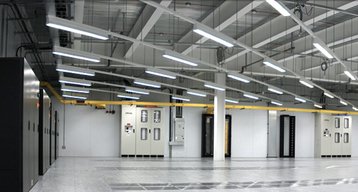 The European facility has been delayed, because of changes to the European value added tax (VAT) rules, said CEO Marty Puranik, who originally promised a local facility when we spoke to him in December 2014.  “The EU changed VAT tax rules in January, and it took a while to get clarity in how we would collect it.” Since 1 January, 2015, The European Union requires VAT to be charged on any services provided from within the UK to other EU states.

Accommodating this change took a bit of planning and put the launch back a bit, said Puranik. The initial confusion created an issue for online providers as there was initially some doubt about who was aqctually required to collect the tax, and who was exempt.

Atlantic.net’s distinctive offering is per-second billing and fast setup times, suitable for startups in their early stages, Puranik told us. The company already has a large customer base in the UK and across Europe, but local services will stop them drifting away: ”European customers want data sovereignty. Now customers that develop with us won’t feel they have to move to a different production environment.”

Atlantic is starting with a single cage at Infinity, but “we expect to expand rapidly,” said Puranik. As well as infrastructure as a service (IaaS) offerings including Linux, BSD and Windows, the provider offers applications such as Wordpress on a platform as a service (PaaS) basis.

Puranik said the service provder’s speed and responsiveness was down to using its own proprietary cloud platform software, instead of the popular OpenStack open source platform: “It’s software we wrote ourselves, optimized for our environment,” he said.

Further facilities are planned in Asia.