DartPoints offers small modular systems from around 500kW, for installation at Edge locations such as cell towers, while TMGcore has a robotic immersion-cooled system, Otto, which was launched in 2019. The pair have not published any plans for rolling the technology out to any specific place or time. 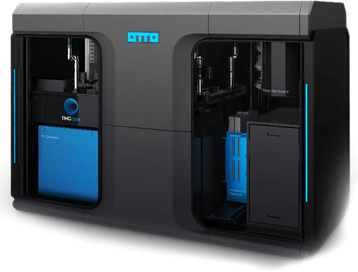 TMGcore provides immersion cooling, but uses a "two-phase" system in which the cooling fluid is allowed to boil and then recondensed. The Otto system is a closed box in which specially built "Hydroblades" are inserted vertically into what appears to be a tank full of specially prepared fluid such as 3M Novec.

Actions such as swapping blades are carried out remotely by robotic arms inside the box, shown in this video (also at the bottom of this page). The company first showed its systems at SC19 in November 2019, where they explained the technology to the late Rich Brueckner of HPCwire.

TMGcore says the system can cool 6kW in a single 1U blade, where GPU units can be stacked two deep because of the effectiveness of the heat removal. The system claims a PUE (power usage effectiveness) of 1.028, and DartPoints says it will give it the most high-density and most efficient Edge computing available, going from modules of 4.5kW up to 1.2MW of power within a space of 320 sq ft. It doesn't require a raised floor or any external cooling.

Two-phase cooling can remove more heat from the IT equipment, because liquids remove heat as the vaporize, but the approach has been criticized by vendors offering "single-phase" cooling where the liquid does not evaporate, but circulates using pumps or convection. Other two-phase liquid cooling vendors include Zutacore.

In November 2019, two single-phase immersion cooling vendors, GRC and Asperitas, took the interesting step of teaming up to provide a site which promotes single-phase liquid cooling, and criticizes the expense and complexity of while two-phase systems, which use more expensive fluorocarbon coolants.

DartPoints proposes to offer neutral Edge meet-me-points within local markets. Founded in 2012, it began offering a Schneider Electric-based module for Edge applications in 2014, appearing in webinars with Schneider. In May 2020, Astra Capital took a majority stake in the company.

"These units are not just the right size, they are modular and scalable to support any power, cooling and density requirement that local networks or large hyperscalers may need in any market they want,” said Scott Willis, CEO of DartPoints.

For TMGcore, DartPoints is a route to market: "Partnering with DartPoints allows us deliver a turnkey solution, quickly, in edge markets, allowing customers to easily interconnect and distribute their content and applications," said John David Enright, CEO of TMGcore.