DCD Magazine out now: Our biggest issue yet

On the cover: High altitude Internet after the fall of Loon

It's easy to forget just how many people don't have access to the Internet. In an effort to connect the world, Google launched hundreds of balloons into the stratosphere - but after years and countless millions, Loon's lofty ambitions ultimately came crashing back down to Earth.

All hope is not lost, though. Others are picking up the high altitude Internet mantle and charting new courses for balloons, drones, and aerostats that could dot the skies. In our cover feature, head to the skies to learn about the future of pseudo-satellites after the fall of Loon.

DCD's editorial team is expanding, and our coverage is growing with it. This is our biggest magazine to date, featuring interviews with Supermicro's CEO, Vint Cerf, Leonard Kleinrock, and a whole bunch more. Oh, and there are lobsters. 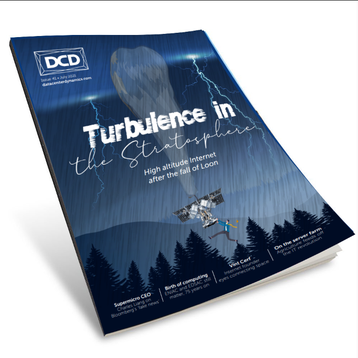 We revisit the ENIAC computer and discuss how the modern computing industry wouldn't exist without its crucial impact. We also talk to the team of volunteers who took on the challenge of rebuilding the influential EDSAC computer, 60 years after the original was sold for scrap.

We talk to CEO Charles Liang about his epic 28 year run, discuss the state of servers, and tackle Bloomberg's spying allegations.

Two decades ago, delay tolerant networking was being used to connect a dazzle of zebras in Kenya. Now it could connect the Solar System. We talk to DTN researchers, 'father of the Internet' Vint Cerf, ARPANET's Leonard Kleinrock, and more about what comes next.

Indoor and vertical farming is growing in popularity. But the sector needs space, power, and water. What does that mean for the data center sector?

Farming lobsters is harder than you'd think. Luckily, data centers are stepping in to help.

The world’s most efficient data center

Go behind the Boden Type One Data Center and find out how it used holistic cooling to hit a PUE of 1.0148.

Analyzing the cryptocurrency laying waste to hard drives and SSDs.

The Edge in action supplement

Four features on the current state of Edge, CDNs, OpenRAN, and data centers to go.

The latest news, how to connect to Alpha Centauri, the dangers of dumb money, and much more.

This year, we have added News Editor Dan Swinhoe and Head of Partner Content Graeme Burton to the editorial team. We are still expanding, and plan to make more announcements in the coming months.

We're always looking to get better. Get in touch with your thoughts about the magazine, our coverage, or what we should cover next.