What role does the data center play in an urban energy smart future?

As more data centers move into cities, they must become more closely integrated with other urban infrastructure. This will be a two-way process, in which data centers can help cities improve their transport, energy and other services, while benefiting from the increased consumption of digital resources.

The future relationship between data centers and their host locations is still evolving; at the recent DCD>London event, we got a look at how digital infrastructure will be integrated into energy networks, as experts described what can be done - and what cities like Stockholm are already doing. 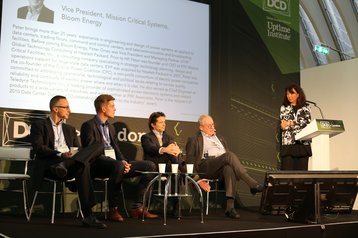 Cities are becoming increasingly digital, as companies like Uber offer more diverse services, according to Susanna Kass, head of innovation and strategy for Baselayer: "It's not going to be Uber transportation. It's going to be Uber freaking everything," she said, commenting on the opening keynote from Uber Compute's Dean Nelson.

This will drive the demand for edge computing, with capacity close to consumers and devices. But this also requires an integration with human communities, she said, in a panel about urban energy.

"When you start talking about edge [and] urban systems, the community aspect is actually becoming increasingly critical," she said. "When you start defining your mission critical systems, it is no longer sufficient to measure reliability, availability, uptime and capacity."

Urban system development should be able to provide people with "a better life." And data center operators will need to reach out to the general population:"Your future data center customers are the people that aren't in this audience. Think about it for a second. Don't you want to get closer to your audience?"

Data center equipment such as uninterruptible power supplies (UPSs) should be shared, he said: "The co-utilization of equipment by the utility or the data center will create sustainable solutions but will also be the enabler of future urban growth."

This will also help tackle environmental issues, he argued: "The kind of infrastructure brought by data centers will enable energy storage and greater means of getting renewable power to urban environments."

Potential energy shortages were a concern for Giordano Albertazzi, Vertiv's president for EMEA: "Power availability is an impediment to the growth of our industry," he said, and as edge computing develops in densely populated areas, the question of how to address growing power consumption will require multiple, orchestrated energy sources.

"No single data center can and will be manageable in isolation," he said. Instead, they should be integrated into the "urban organism."

"Our industry needs to make that stand and move beyond looking at the individual infrastructure," he added.

This vision is shared by Ectogrid, whose head of data center and telecom sales for Europe, Andrea Miserocchi, also spoke at the event.

The company has installed more than 200 thermal energy distribution systems "using data collected from the infrastructure and weather conditions," Miserocchi explained. These store and provide thermal energy - heat or refrigeration - by connecting urban data centers and other facilities.

Meanwhile, edge computing and the proliferation of micro data centers will dramatically increase the number of workloads processed in urban environments, said Peter Gross, VP of mission critical systems at Bloom Energy. Finding ways to provide green, sustainable, emission-free energy in the city will be hard, he warned, given that edge facilities can vary wildly in capacity. Gross represents Bloom, so it's no surprise that he proposed fuel cells as part of the solution.

To meet energy conservation requirements, we must continue adopting software-defined systems, Albertazzi said. A mix of "self-generation, the grid and available energy sources gives us another degree of orchestration and optimization," he added. Key to this will be to "never look at that piece of infrastructure in isolation."

Miserocchi agreed, stating that "understanding [energy customers'] business models allows us to explore new opportunities," suggesting that cooperation and communication between renewable energy providers "will have to increase more and more."

Peter Gross said it will be necessary to "aggregate, pull together, and optimize power" in such a way that it will match demand and supply, eliminating issues with over-provisioning and bringing providers closer to their capacities - rather than having to maintain big reserves, as they do now.

But, with potentially thousands of edge data centers in urban environments, where power is scarce, "reliability is not restricted to the facility itself," he said. "We're not talking about the data center but about the ecosystem."

"This will have cost, size, operational implications and it's going to change quite significantly the way we look at construction, design and operation of data centers."

These changes will likely bring about new ownership models, Rylander said, adding that developing such systems would be a lengthy process and would require "a joint investigation in how these opportunities will look like."

For more on European initiatives to build the digital infrastructure and energy systems of the future, join us at the DCD>Energy Smart event in Stockholm April 1-2..