Facebook is adding another 30,000 square meters to the campus which will heat more homes

Facebook is expanding its Odense data center campus in Denmark and will also increase its district heating capacity.

According to the data center's Facebook page, construction is already well underway, with Odense expected to grow by almost 30,000 sq m (323,000 sq ft). 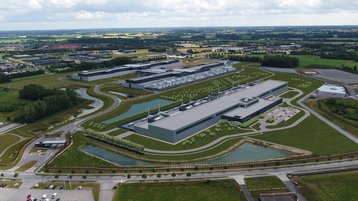 Keeping them toasty bit by bit

The cost of the project is estimated to be around DKK10bn ($1.5bn). As part of the project, infrastructure will be expanded to eventually recycle a total of 165,000MWh annually - heating around 11,000 homes.

The social media and advertising company has contracted district heating firm, Fjernvarme Fyn, to expand the data center’s capacity for recycling its waste heat. The company was previously brought on to develop the campus's initial heating system which warmed up around 6,900 houses. This system went online in July.

Facebook collects heat for the system by circulating water about the data center via insulated steel pipes passed through copper coils inside cooling units. The water picks up low-temperature heat and is channeled to Fjernvarme Fyn's heat pump facility. Fjernvarme Fyn then uses heat pumps to warm the water further, until it is hot enough to be used in homes.

Currently, the data center is a 50,000 sq m (538,000 sq ft) site that came online in September 2019. During its construction, the Odense facility was criticized by authorities over unfair labor practices and paying contractors via foreign accounts to bypass taxes.

Since April, the Odense data center has held a LEED Gold certification and the social media company has committed itself to building efficient data centers and meeting climate targets. By the end of the year, Facebook's global operations will be 100 percent supported by renewable energy.