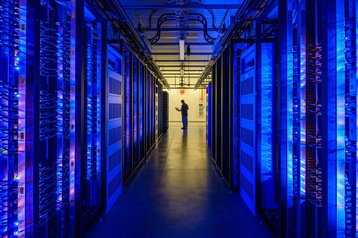 “Facebook is also committed to powering our data centers with 100 percent clean and renewable energy,” the company said in a post.

“That is why we worked with the Tennessee Valley Authority to establish a renewable energy tariff that will let qualifying customers, not just Facebook, buy new renewable resources. We are also working closely with them to identify new solar projects in the area that will power 100 percent of our facility.”

TVA President Bill Johnson said at a launch ceremony (via AL.com): “I’ve been here for a number of announcements like this. I’ve figured out what’s happening here. This isn’t a coincidence. This is like Alabama football. We out-train, we out-prepare and we out-recruit the other team. So you know what I’m going to say: Roll, Huntsville!”

One of the ways Huntsville out-competed potential rivals was through tax breaks. Operating secretly under the pseudonym of Starbelt, Facebook negotiated a non-direct incentive package of $6.6 million for a development then known as ‘Project Cricket.’

Huntsville is home to the US Army’s Redstone Arsenal garrison and NASA’s Marshall Space Flight Center, making it a military tech hub. IBM operates a data center on the army base, while DC Blox earlier this year opened a nearby facility.

Facebook, meanwhile, is pursuing several major data center developments in the US, including a $750m site near Salt Lake City, another in Atlanta, and expansions in Iowa and Nebraska.