For The New York Times, a move to the cloud

The 165-year old news publication The New York Times is set to modernize its digital infrastructure, turning to public cloud as it plans to move out of three data centers.

The Times currently uses a mixture of cloud services, space in colocation data centers and its own internal facility, but plans to streamline and upgrade its backend to rely more on the cloud and on cached content in edge facilities.

Right through the very heart of IT 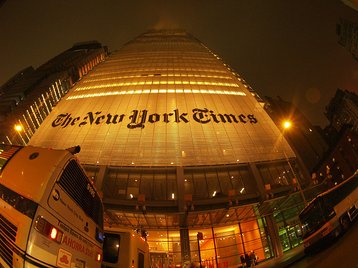 NYT CTO Nick Rockwell confirmed in an interview with DCK that the paper aims to leave data centers in Newark, Boston and Seattle, but will keep its internal data center at The New York Times building in Times Square.

Oracle database-dependent applications will be deployed on AWS, while the rest will mostly be run in containers on Google Cloud Platform, orchestrated through Kubernetes.

The newspaper has adopted a content delivery network operated by Fastly, which caches content on SSD drives in edge data centers near major cities. The company partnered with GCP in September 2015 to offer discounted prices.

Rockwell said that the cost of Fastly was “immaterial,” and that shifting to GCP is expected to cut costs.

For its primary API used for mobile push notifications, which sends out 25-30 million notifications per minute in the event of breaking news, the NYT spent $25,000 per month on an AWS service that could scale approximately 40 times above the typical load.

With GCP and Fastly, the company expects to spend roughly $5,000 per month.

This modernization comes at a time when, despite the mainstream media being seemingly stuck in a downwards revenue spiral, traffic and subscription figures for The New York Times are up.

This is primarily due to a single reader: the election of President Donald Trump caused digital subscriptions to rise tenfold for the publication he called “The Failing New York Times.”

After an expected bump during the election night, traffic appears to have remained high due to Trump’s ability to dominate headlines. Despite announcing overall cuts and possible layoffs in January, the NYT plans to invest an additional $5m to cover the President this year.

The Times, they are a-changin’

The shift to Google as a primary cloud provider is not the only partnership of note between the storied publication and the Internet giant.

Earlier this year it was revealed that the NYT is testing a tool developed by another subsidiary of Google’s parent company, Alphabet, for content moderation.

‘Perspective,’ from Jigsaw (formerly Google Ideas), aims to use artificial intelligence to spot comments deemed “toxic,” so that they can be removed.

Another major partnership occurred in the physical world, when subscribers to the NYT’s Sunday print edition received a free Google Cardboard virtual reality headset in 2015.

Elsewhere at the NYT, deputy tech editor Quentin Hardy - who in December wrote about the positive effect of a Google data center on a local community - joined Google as head of Editorial at Google Cloud in January. Hardy confirmed to DCD that interviews for the job took place “several weeks after” the article.

GCP’s main competitor Amazon Web Services has its own allies in the publishing space.

Foremost amongst them is The Washington Post, which happens to be owned by Amazon founder and CEO Jeff Bezos. Bezos worked with The Post to develop its digital content management system, Arc Publishing, which is hosted on AWS.

The Post has moved to turn Arc into a new revenue platform by licensing it out to other publications. The company has signed deals with smaller outlets like the Alaska Dispatch News and Willamette Week, and last month inked a deal with publisher Tronc - owner of the Los Angeles Times, Chicago Tribune, Baltimore Sun, Orlando Sentinel, and others.

The Post, which said it has a 60-80 percent profit margin on the Arc business, hopes to one day generate $100 million a year in revenue by working with other publishers. In the meantime, all those that sign up for the service end up on AWS.