The company is to invest RM1.38 billion developing a campus at the Nusajaya Tech Park in the Iskandar Puteri area of Johor. GDS acquired the land in July 2021. 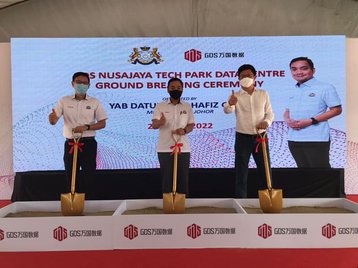 “It is a great pleasure to witness the ground breaking ceremony of GDS Hyperscale Data Centre Campus at Nusajaya Tech Park this morning,” said Lee Ting Han, head of the Johor state committee for investment, trade, and consumer affairs. “We see this project as a validation of Johor’s attractiveness as a top international and domestic investment destination, driven by our world-class infrastructure, business-friendly regulatory environment as well as the state’s enduring political stability.”

GDS, founded in 2006, operates dozens of data centers across Shanghai, Beijing, Shenzhen, Guangzhou, Chengdu, and Hong Kong; in its most recent results the company said it had 487,883 sqm (5.25 million sq ft) of colocation space in operation. It also recently bought land in Indonesia for a planned development.

Recent reports suggest GDS is interested in acquiring ChinData, which operates a facility in Malaysia through subsidiary Bridge Data Centres, which is also building a site in India.

Singapore-based GLP, which is developing a number of data centers across China, was recently rumoured to be an acquisition target for GDS before reportedly pivoting instead to look to raise about $500 million from investors in exchange for a minority stake in the platform.