General Dynamics Mission Systems and Iridium Communications have been awarded a contract by the Space Development Agency as part of the SDA's low Earth orbit constellation.

The seven-year contract is for $162.9 million as a baseline, with $161.5m in options, to operate the ground systems and manage network operations for Tranche 1 of the National Defense Space Architecture (NDSA). 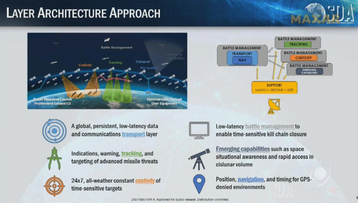 The NDSA plans to grow to hundreds of satellites that can track targets such as missiles, hypersonic vehicles and other objects. It will also provide position, navigation and timing for warfighters in GPS-denied environments, as well as communicate with platforms and warfighters on Earth and between other satellites.

In Tranche 0 in fiscal year 2022, there will be demonstration satellites that warfighters can use for testing missile detection and tracking. Those satellites are being built by Lockheed Martin, York Space Systems, SpaceX, and L3Harris, and being launched by SpaceX. It is set to launch before March 31, 2023.

In Tranche 1 in fiscal year 2024, initial warfighting capability will be achieved. Regional missile detection and tracking will be available. That will be ready for launch starting in September 2024, with 126 optically-interconnected space vehicles (SV) York Space Systems, Lockheed Martin Space, and Northrop Grumman Space Systems.

It is this tranche that General Dynamics and Iridium will provide ground station and networking support. The contractors will set up two operations centers located at government facilities in Grand Forks Air Force Base, North Dakota, and Redstone Arsenal in Huntsville, Alabama.

They will also develop 14 new ground stations; eight Ka-band, two S-band, and four with optical communications. The companies will develop a common ground architecture to integrate satellites from the different satellite vendors.

“Iridium, General Dynamics Mission Systems, and the US government have a long and successful history of working together, and partnering on this project is a natural evolution of our relationship,” said Matt Desch, CEO of Iridium. “Iridium’s 25 years of experience operating in LEO makes us uniquely qualified for this opportunity.”

Following Tranche 1, the constellation will be expanded to cover the globe, with Tranche 2 expected in fiscal year 2026.

In Tranche 3 in fiscal year 2028, advancements will be added to Tranche 2 such as better sensitivity to missile detection and tracking, communications with the Combined Joint All-Domain Command and Control network and enhanced Positioning, Navigation, and Timing (PNT).

For Tranche 4, in fiscal year 2030, the space architecture will be upgraded.