Google has launched a new cloud region in Dallas, Texas.

“Today, we’re excited to expand our presence in Texas with the launch of our newest Google Cloud region in Dallas, bringing a second region to the central United States, the eleventh in North America," the company said this week. 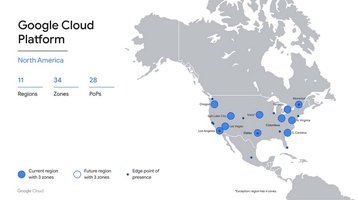 The Dallas location is Google’s first region in Texas. It acquired 375 acres in the Midlothian area southwest of Dallas in 2018 under the name ‘Sharka’. Reports at the time suggest the company aimed to invest around $500 million in the project.

"The Dallas region provides you with the speed and availability you need to innovate faster and build high-performing applications that cater to the needs of nearby end users," Google said. "We’ve heard from many of you that the availability of your workloads and business continuity are increasingly top priorities. The Dallas region gives you added capacity and the flexibility to distribute your workloads across the US."

The new region – first announced in December 2021 – is one of three new regions the company has launched this year. May 2022 saw Google launch a new US cloud region in Columbus, Ohio, and its first Spanish region in Madrid.

Microsoft opened its South Central US Azure cloud region in Texas in 2008; the company has a number of data centers in and around San Antonio and has filed applications to build four more.

AWS doesn’t currently have a cloud region in Texas. In July 2021 the company launched a Local Zone edge facility in Dallas; It also has a Wavelength Zone in a Verizon facility in the city. It recently bought nine acres of land in the DeSoto area of Dallas Fort-Worth and is planning facilities in San Antonio under the name Project Rockfish.