Energy use by China’s Internet industry is set to skyrocket, says the group

Greenpeace has published its Green Cloud 2020 report which contains a list ranking more than a dozen Chinese firms according to their use of renewable power.

The research was conducted in partnership with the North China Electric Power University. The list, for the first time, scores 15 Chinese firms based on their efforts to reduce carbon emissions, improve energy transparency, renewable energy performance, and how much they are under government and industry Influence. 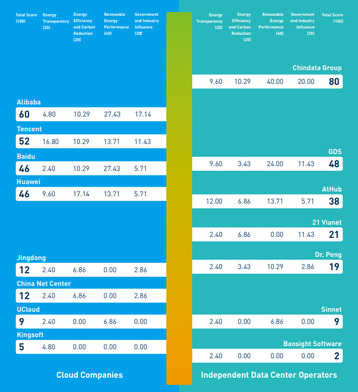 Just last year, Greenpeace published a report on the country’s data center industry and its heavy reliance on coal for energy.

The report said data centers were responsible for 99m tonnes (109m US tons) of CO2 emissions in 2018. With facilities powered heavily by fossil fuels, Greenpeace warned the figure could rise to 163m tonnes (180m tons) by 2023.

Research from Greenpeace East Asia and the North China Electric Power University found that the data center industry consumed 161TWh of electricity in 2018. In 2018, 73 percent of the power used by data centers came from coal.

Attempts to be green

Poor results aside, Chinese companies have been investing in renewable energy - although the investments are on a smaller scale compared to some foreign companies.

Chinese companies are riding on the opportunities to go with renewable energy, according to Greenpeace. For instance, Alibaba’s data center in Zhangbei in Hebei province is a cloud facility hosting over 600,000 servers and has been routing power from local windfarms. Elsewhere in China, a Baidu data center in Shangxi province purchased 550GWh of wind power in 2018.